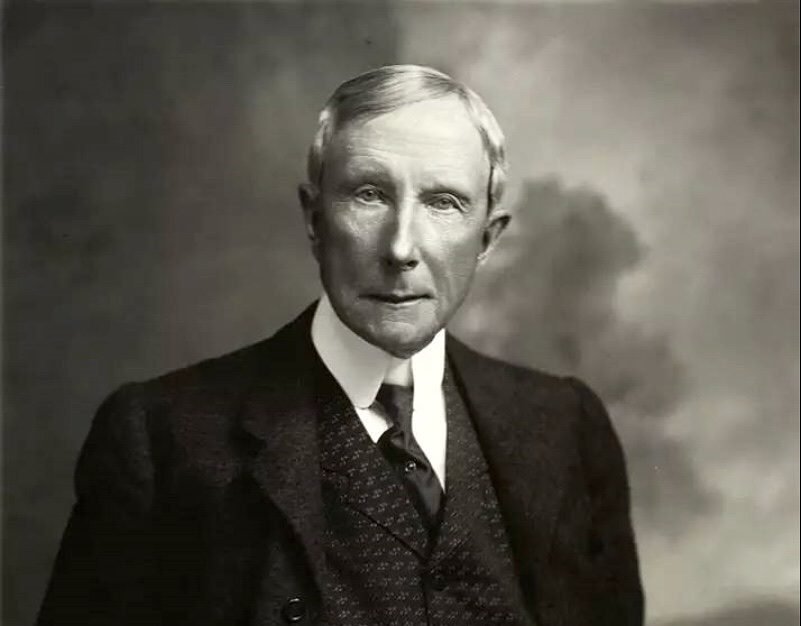 John Davison Rockefeller was born on July 8, 1839, on a farm in Richford, New York. His father, William Avery Rockefeller (1810-1906), “Big Bill” mistresses, was famous for leaving his family and taking long trips for various businesses, including selling herbal medicine. Still, he taught young John how to be smart about both making and spending money. Rockefeller’s mother, Eliza Davison (1813-1889), was a devout Christian. She was responsible for keeping the family together and raising her six children with a sense of discipline and hard work. Although his family moved to the eastern United States several times, John attended good schools, was hardworking, and received a good education. While living in Strongsville, a suburb of Cleveland, Ohio, he decided to drop out and take a ten-week college course in business instead. At the age of 16, he got a job at a bookstore to support his family.

In 1859, the year Edwin Laurentine Drake (March 29, 1819 – November 9, 1880), also known as Colonel Drake, the first American businessman to successfully drill for oil, opened his famous discovery in Oil Creek, Pennsylvania, Rockefeller met Maurice Clark for $4,000. started a wholesale food business with a start-up capital. During the American Civil War, Rockefeller continued his business successfully and, though sympathetic to the abolitionist ideals of the North, did not fight; Rockefeller instead donated money to the Union Army and paid for a reserve military force to fight on its behalf.

Anticipating that oil would turn into a giant industry, Rockefeller sold his company in 1862 and rolled up his sleeves with chemist Samuel Andrews. At that time, people used whale oil in lamps for lighting. Paraffin distilled from petroleum is very expensive, and it is a dangerous lighting method because it suddenly glows. Instead, people used whale oil at the time, but the number of whales has declined rapidly as a result of overfishing. Whale oil is getting more and more expensive.

With the technology of that period, oil drilling was very difficult and a matter of luck. Rockefeller saw the risks and expense of oil extraction. Rockefeller buys oil from producers. Together with the chemist Samuel Andrews, he distills petroleum very finely to obtain kerosene. Kerosene is not to shine suddenly when burning. And thus, kerosene began to be used in lamps.

Oil was increasingly replacing whale oil as the main lighting fuel, and as Pennsylvania’s Oil District was booming, Rockefeller and Clark, together with Clark’s two brothers and chemist Samuel Andrews, established an oil refinery in Cleveland in 1863. Two years later, Rockefeller bought the Clark brothers’ shares for $72,500. Rockefeller and Andrews named their refineries Standard Works, implying that their goal was a steady, quality oil flow to customers.

Indeed, as Rockefeller later recalled, he had planned to do the oil business “on a larger scale.” They set up an office in Oil City Pennsylvania. In 1866, Rockefeller’s younger brother William joined him and they built another refinery in Cleveland. But a year later, this new refinery was absorbed by Rockefeller and Andrews. This led to a bitter relationship between the Rockefeller brothers for the rest of their lives.

In 1867, Henry Flagler and Stephen Harkness entered into partnership with Rockefeller and Andrews. This was the core of Standard Oil of Ohio, which was formally established in Cleveland in 1870. Like Rockefeller, Flager played a vital role in the company’s success and defined their friendship with his famous slogan: “A friendship built on business is better than a business built on friendship.”

Standard Oil of Ohio was essentially a subsidiary and did not want to get involved in the risky oil exploration and drilling business. Instead, the partners focused on an aggressive “horizontal integration” of other oil refineries under the Standard umbrella. 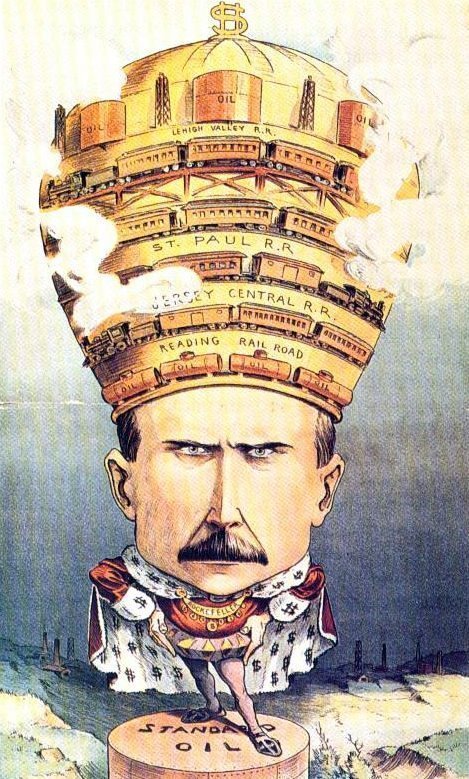 Standard Oil argued in its “well-known” Court defense that increased refineries in the northeastern U.S. had led to chaotic jobs, unnecessary competition and unreasonably cheap oil prices, and that Standard had actually bailed out the oil industry in its infancy. However, the company’s “standardization” of the oil industry included practices that were later found to be unethical.

In those days, railroad companies were in competition to transport barrels of oil from or to refineries. Standard made collusion with the Lake Shore Railroad in New York and the Southern Improvement Company in Pennsylvania to allow trains carrying its product to ship a minimum, set amount of oil per day, but at which the railroad company would apply a special discount. These discounts made Standard’s oil cheaper than its competitors in the Oil District, Cleveland, and New York.

Standard’s overall plan was to either buy out competitors or put them out of business, thereby monopolizing the oil market. To achieve its objectives, the company has sensitively monitored the activities of its competitors, either selling artificially cheaper petroleum products in areas where it competes, or allowing other refiners to join its venture, some of which gladly accept.

During the 1870s and 1880s, Standard became the dominant company, controlling about 90% of refineries, pipelines, shipping and oil marketing in the United States. In 1882, it consolidated the power of its many subsidiaries and shareholders into the Standard Oil Trust, managed by nine trustees (including Rockefeller and other founding members). Of the Trust’s 700,000 shares, Rockefeller owned 191,700.

In 1885, the headquarters moved to New York.

In response to protests against Standard’s practices and growing power, Ohio Senator John Sherman initiated an anti-trust legislative action in 1890 demanding the dissolution of the Standard Oil Trust. Still, Rockefeller was in luck: two years ago, New Jersey passed a law that allowed large companies to operate in that state while holding shares in other companies operating out of state. Rockefeller and his associates simply renamed the Trust Standard Oil Company of New Jersey and registered it there.

In 1897, Rockefeller retired from Standard, although he continued to retain majority interests and influence in the company for the rest of his life. During his forty-year retirement, he expanded his business activities into other industries.

On the one hand, Rockefeller was an avid donor to charities even as a young boy and is known as one of the world’s greatest philanthropists. He used his wealth to found the University of Chicago in 1890 and Rockefeller University in New York in 1901. The Rockefeller Foundation, which he founded in New York in 1913, has been a major supporter of research and service internationally in the fields of education, the arts, sciences, health and food.

After Ida Tarbell published her disclosure in The History of the Standard Oil Company in 1904, admiring Rockefeller’s philanthropic activities, she simply described the man as a “money madman.”

Rockefeller died at the age of 97 in Ormond Beach, Florida, on May 23, 1937, and is buried in Cleveland, Ohio, where he called his home and built a home for his parents and siblings, and a home for his wife and children.