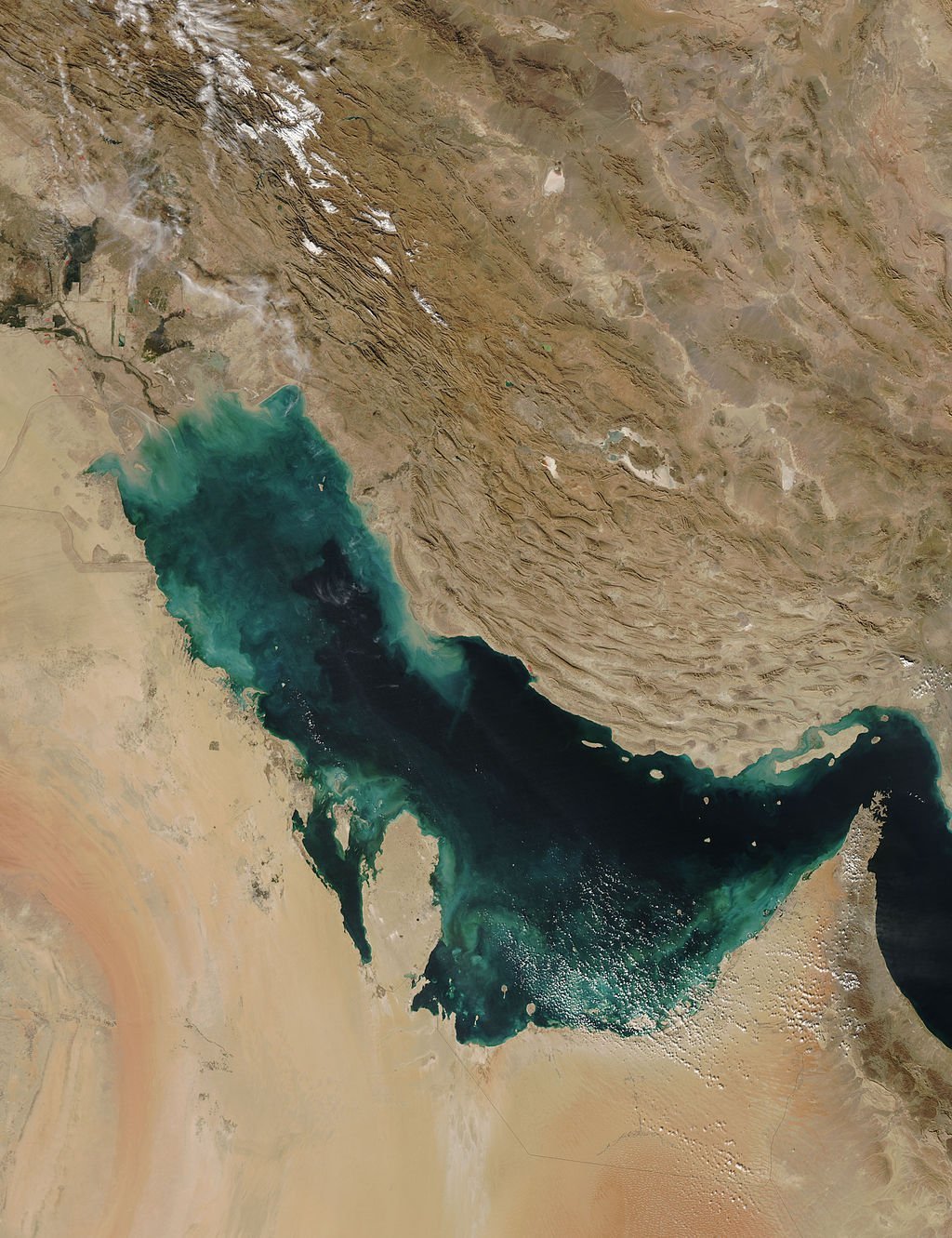 The Persian Gulf is a mediterranean sea in Western Asia. The body of water is an extension of the Arabian Sea (Gulf of Oman) through the Strait of Hormuz and lies between Iran to the northeast and the Arabian Peninsula to the southwest.The Shatt al-Arab river delta forms the northwest shoreline.

The body of water is historically and internationally known as the “Persian Gulf”. Arab governments refer to it as the “Arabian Gulf”  or “The Gulf”. The name “Gulf of Iran (Persian Gulf)” is used by the International Hydrographic Organization.

The Persian Gulf was a battlefield of the 1980–1988 Iran–Iraq War, in which each side attacked the other’s oil tankers. It is the namesake of the 1991 Gulf War, the largely air- and land-based conflict that followed Iraq’s invasion of Kuwait.

The Persian Gulf has many fishing grounds, extensive reefs (mostly rocky, but also coral), and abundant pearl oysters, but its ecology has been damaged by industrialization and oil spills.

The International Hydrographic Organization defines the Persian Gulf’s southern limit as “The Northwestern limit of Gulf of Oman”. This limit is defined as “A line joining Ràs Limah (25°57’N) on the coast of Arabia and Ràs al Kuh (25°48’N) on the coast of Iran (Persia)”.

This inland sea of some 251,000 square kilometres (96,912 sq mi) is connected to the Gulf of Oman in the east by the Strait of Hormuz; and its western end is marked by the major river delta of the Shatt al-Arab, which carries the waters of the Euphrates and the Tigris. Its covered with Iran most of the northern coast and Saudi Arabia most of the southern coast. The Persian Gulf is connected to the Indian Ocean through the Strait of Hormuz.

Countries with a coastline on the Persian Gulf are (clockwise, from north): Iran; Oman’s Musandam exclave; the United Arab Emirates; Saudi Arabia; Qatar, on a peninsula off the Saudi coast; Bahrain, an island nation; Kuwait; and Iraq in the northwest. Various small islands also lie within the Persian Gulf, some of which are the subject of territorial disputes between the states in the region.

In the gulf, there was no continental shelf; its waters were not very deep.The geologists had ascertained that the geological structure of the soil beneath the sea was the same as that of the adjacent territory which contained immense reserves of mineral oil. Consequently there were fantastic deposits of oil would certainly be discovered.

The pearl industry had once been the mainstay of the Gulf states till the first oil was disvcovered on Bahrain in 1932, then in Saudi Arabia and Kuwait followed in 1938, and Qatar in 1940.

It dawned on the oilmen that there was a good possibility of finding oil offshore in the region conducive to drilling from simple structures or barges. The Arabian side of the Gulf has similarities with the Gulf of Mexico, where the modern offshore oil industry began, both having relatively shallow waters.

After a lull during World War II, interest in offshore exploration revived, spurred on by President Truman’s proclamation of 1945, which effectively extended US jurisdiction over the natural resources of the subsoil and seabed of its entire continental shelf. Similar proclamations followed in 1949 from the rulers of the Arabian littoral, the Gulf sheikhs, in respect of their own seabed resources. But there were serious logistical obstacles to working offshore, since the Gulf sheikhdoms were undeveloped, lacked basic infrastructure and bore no comparison with the commercial environment of the United States at that time. Great Britain was the predominant foreign power in the region, and sought to restrict the access of non-British firms through a network of treaties and undertakings with the local rulers. 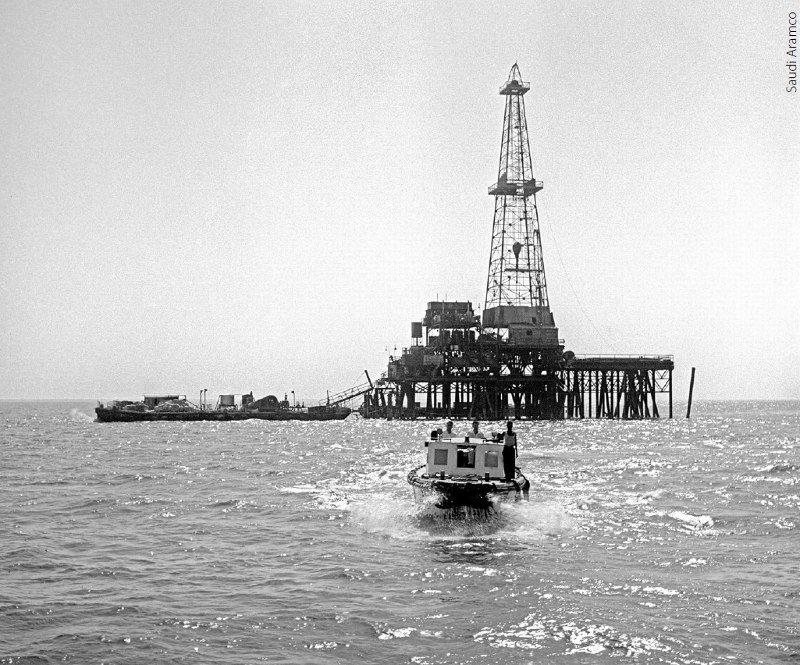 In Saudi Arabia, where British influence was waning, the government decided to work with the onshore concessionaire, the Arabian American Oil Company (Aramco). It turned out to be the largest offshore oil reservoir in the world in 1939 and In 1949, offshore drilling began.

In Qatar, the first offshore concession was granted to Superior Oil of California, a veteran of offshore operations in the Gulf of Mexico, and Central Mining and Investment Ltd, a British company. However, Superior Oil withdrew from the venture in 1952, citing ‘financial, political and economic’ difficulties, and the concession went to Shell, another company with offshore experience.

The Shell Company of Qatar was formed in October 1953, with its headquarters at Doha. Undersea surveys began with a converted merchant vessel, Shell Quest. A drilling rig soon appeared in the incongruous form with the surroundings of Doha Bay.

By December 1956, the rig had drilled one well to a depth of 2,042m and had just completed a second one at 3,657m but without finding any oil. Then ther has been a disaster. Two 2,000-ton pontoons supporting the platform broke loose due to bad weather and all the lights went out. The platform legs were damaged, the helicopter landing platform damaged and several Qataris tragically lost their lives.

The wreck delayed Shell’s operations in Qatar and caused it to review its $21 million investment. In the event, the company decided to persist and the exploration programme was restarted, with successful wells being drilled at Idd al-Shargi (1960) and Maydam Majzam (1963). Oil started flowing in 1964. After the discovery of the massive North gas field in 1972, with a smaller oilfield above, this country of dwindling oil resources was eventually propelled into the top rank of natural gas producers.

Having decided to drill, the challenge was to set up a rig and the infrastructure to support operations. BP drew on technologies from the Gulf of Mexico in the construction of a jack-up drilling platform, the ADMA Enterprise, which was built in Hamburg and then towed to the Gulf. The deserted Das Island became the hub of operations: an airstrip, accommodation and eventually oil storage tanks were built. In 1958, the first oil well was drilled at Umm Shaif, striking good-quality oil at 1,676m, followed by further discoveries, including the supergiant Zakum field. In 1962 the first cargo of oil was loaded onto BP tanker, British Signal. In 1972, BP sold a 45% share in ADMA to the Japan Oil Development Company (JODCO).

Zakum is the biggest oilfield in Abu Dhabi and one of the largest offshore fields in the Gulf – and in the world. It covers an area of about 1,500 km2 and lies in an average water depth of around 20m and consists of an upper and lower reservoir.

The ADMA partners decided to push ahead with developing the lower reservoir layers. These had better quality oil and were more productive, since they were at a higher pressure than those in the upper reservoir, which they decided not to develop.

As a result of this decision, two new companies were created: ADMA-OPCO to operate the lower field and the Zakum Development Company (ZADCO) to develop and operate the upper field. The latter company now has three major shareholders: the Abu Dhabi government with a 60% share, ExxonMobil with 28%, and JODCO with 12%.

In Dubai, after D’Arcy had obtained the first offshore concession in 1954, oil development was put on hold for several years. Finally, in 1966, the Continental Oil Company acquired a 50% share in the concession and drilling began, leading to the discovery of the Fateh (‘Good Fortune’) field. The problem of storing and transporting oil in shallow waters was solved by building and large floating tanks, known as khazzans, and towing them to where the oil was produced offshore.

On 22 September 1969, the first tanker of oil was exported from Fateh Field, thus enabling Dubai to finance a number of massive projects new to the Gulf; this was the start of the modern city of Dubai.

For Sharjah, a protocol agreement with Iran over the disputed Abu Musa Island ensured that, when the Mubarak field was discovered in 1972, its oil would be shared with Iran. This oilfield was found about 35 km east of the island by the Buttes Gas and Oil Company operating through Crescent Petroleum. Initially, the oilfield went on stream at high rates, but by 1983 production had slumped to 6,400 bopd and to 5,900 bopd two years later.

Boundaries and disputes on the Sea

Oil exploration gave rise to several disputes between the rulers over their maritime boundaries. Kuwait was in an awkward position: bordered by Saudi Arabia and Iraq, and facing Iran. This led to arguments over maritime boundaries that would fetter oil exploration and development. A dispute between Saudi Arabia and Bahrain over the Fasht Bu Saafa oilfield was settled in 1958 with the former extracting the oil and the latter sharing the proceeds. Qatar and Abu Dhabi argued over Halul Island until two British experts determined that it belonged to the former and the Al Bunduq oilfield was to be shared between them. Dubai and Abu Dhabi were at loggerheads for many years over their maritime boundary, particularly when the Fateh field was discovered, until the matter was settled in 1968.

During the 1930s, an ongoing dispute between Qatar and Bahrain over the Hawar Islands was exacerbated by the prospect of finding oil in the area. The British representative ruled against Qatar and, when it came to delimiting the maritime boundaries in 1947, the UK government confirmed his decision. The dispute was eventually settled by international arbitration in 2001: Bahrain retained the Hawar Islands and Qatar kept Zubarah, part of the mainland to which Bahrain had laid a claim.

More about strategic gain than oil prospects, the dispute between the United Arab Emirates (UAE) and Iran over the Abu Musa and Tunb islands was the most serious territorial issue. In 1971, on the eve of the inauguration of the UAE, Iranian forces occupied the islands and claimed them for the Shah. The two Arabian claimants – Sharjah and Ras al-Khaimah – became part of the UAE, which took up the claim on their behalf; but it is unresolved and remains a contentious issue in the region today.