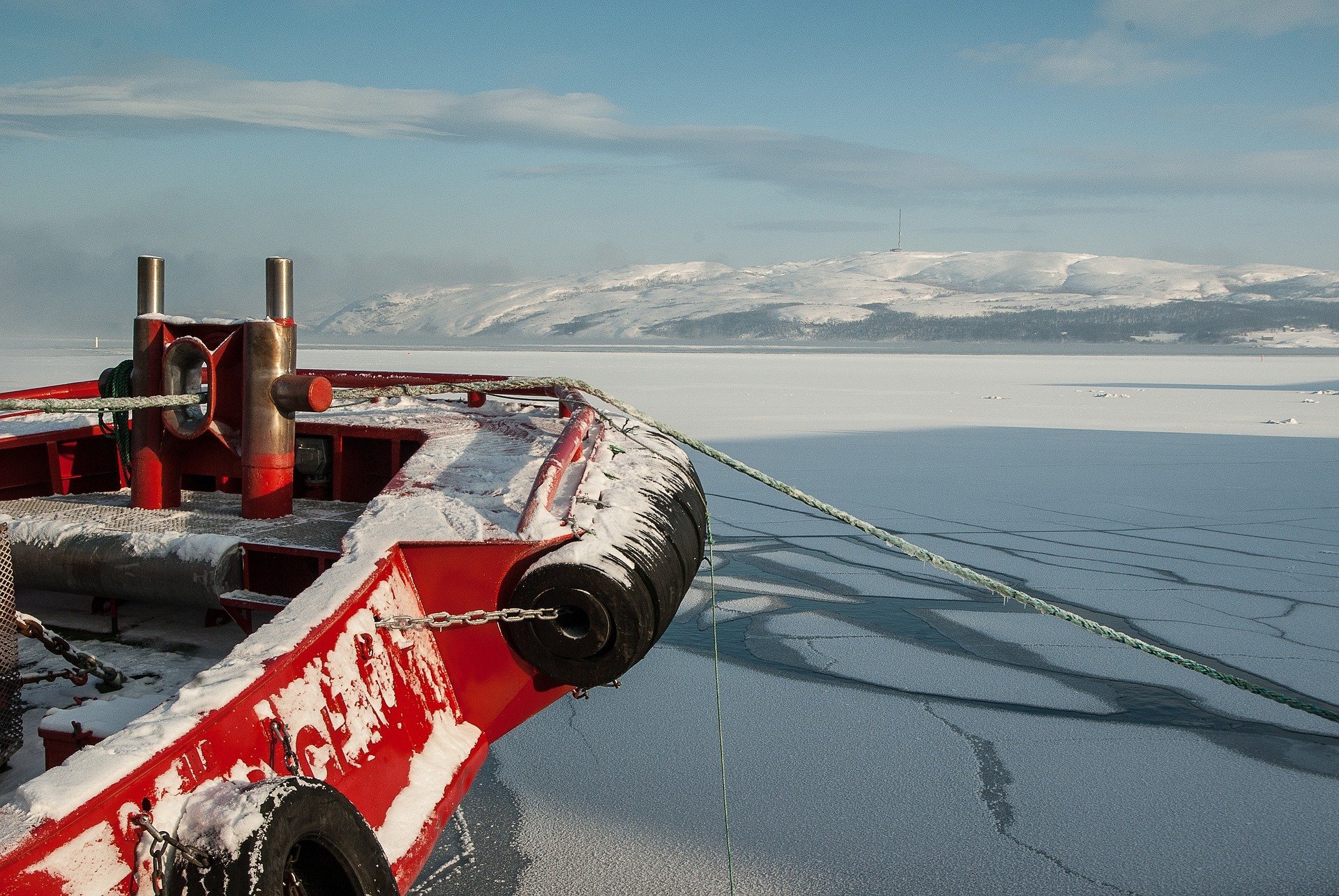 The North Pole shipping routes are sea routes used by ships to pass across sections or the whole of the North Pole. There are three main roads connecting the Atlantic and Pacific oceans: the Northeast Passage, the Northwestern Passage and the Transpolar Sea Route. There are also two more important routes: the North Sea Route and the Arctic Bridge.

To connect the Atlantic to the Pacific, the Northwest Passage goes along the shores of Northern Canada and Alaska, the Northeast Passage follows the coasts of Russia and Norway, and the Transpolar Sea Route crosses the North Pole all along the North Pole.

The Arctic Bridge is an internal Arctic route that connects Russia to Canada, and the North Sea Route follows the Russian coast from the Bering Strait to the East, from the Kara Sea to the West.

The main difference between the North Sea Route NSR and the Northeast Gateway NEP is that the latter includes the Barents Sea and provides access to the largest Russian Arctic port Murmansk port and the Atlantic. Given that NSR is the majority of NEP, some sources use the terms NSR and NEP interchangeably.

The navigability of the Arctic Sea routes essentially depends on the width of the frozen mass because it prevents glacier sea traffic for part of the year. The thawing the areas covered with glacier at sea determines its windows when ships can pass through.

Navigation in NEP, Barents Sea is relatively easier in terms of total ice ratio and open sea. Unlike similar latitudes in Alaska or Canada, the amount of glaciers is lower in this area due to the warm water streams from the Gulf Stream. For both NSR and NEP, sea ice decreases more quickly in summer than NWP area. This feature has become more noticeable since the beginning of the 2000s, due to the records falling. However, in the Laptev Sea and the Kara Sea, where NEP passes, NEP is inaccessible for most of the year, since the risk of not having a minimum pass throughout the year is 17% and 15% respectively.

The Transpolar Sea Route TSR remains a mostly unused route because ships that can pass through are only developed ships, icebreakers, capable of breaking the permanent thick ice layers. In 2010, TSR was only accessible in ice breaker ships in a 10-day period, and this 10-day time is still not considered to be a completely reliable time of period.

Various projections show that the ice mass will be greatly reduced in the future and may even disappear at the end of the century. It is already being monitored that arctic ice is exhausted. The massive ice blocks decreased by 4.3% every ten years on average. However, this decrease is not the same all year round. If we only observed the month of September, the ice floe decreased 10.7% every ten years, but only 2.8% in March. Projection models of arctic ice mass evolution have been based on the past 30 years. These projections mainly use circulation models of ocean and atmospheric currents, such as NEMO, the OGCM and the CMIP. They also take into account the evolution of greenhouse gases, such as CO2.

However, all these predictions remain uncertain, as the acceleration of global warming and the differentiation of air movements and ocean currents can lead to unexpected results in climatic conditions. 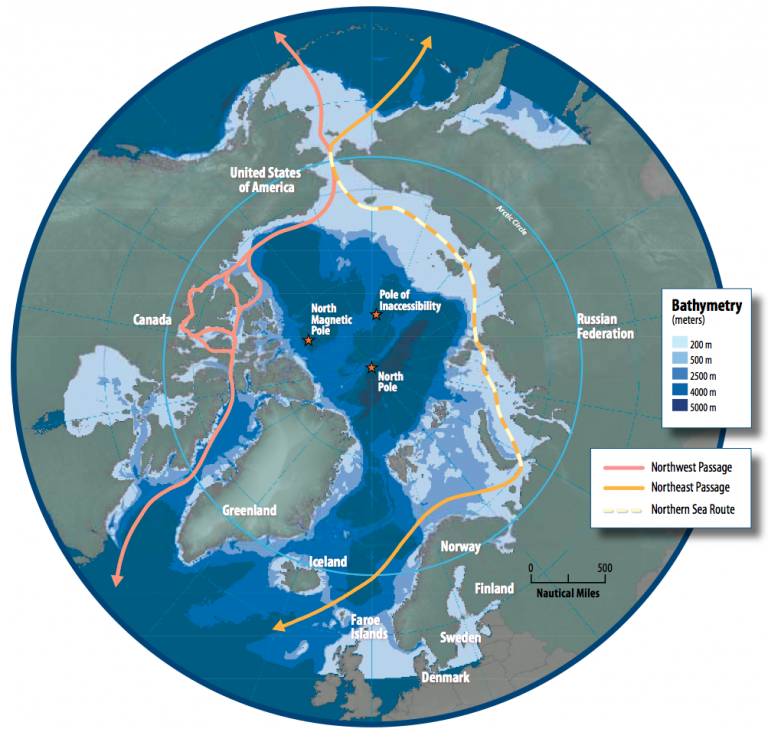 The trade-related relevance of the North Pole shipping routes lies within the shorter travel distances they offer between key economic regions such as Northern Europe and East Asia. Indeed, passing through the North Pole, for example, from Northern Europe to Shanghai, through the Suez canal can reduce the distance traveled by ships by up to 3000 nautical miles compared to the same journey. However, in case of putting the addition of 1000 nautical miles on top of a journey from Northern Europe to Vietnam makes it illogical.

Also, shortened distance does not always mean time earned. A study concludes that travels from Northern Europe to East Asia will never save, depending on the glacial conditions at the Arctic. In fact, the total duration of the journey largely depends on the time spent in glacier-covered water, which significantly slows ships. Therefore, if the routes are only open for 3 months a year, which means heavy ice conditions, the above mentioned transit can cause a 3-day loss compared to the road passing through the Suez Canal. However, if the routes are open all year round, which means perfect ice conditions, the transition can result in a gain of up to 7 days. Another study estimates that the time earned can reach up to 16 days.

Other factors to consider

The economic viability of the Arctic roads does not only depend on time efficiencies;

It is important not to overlook many of the cost factors to consider. First, Russia applies tariffs to NSR, which is the most used shipping route due to favorable ice conditions, unlike Canada, which does not apply any tariff on the use of NWP, where glacial conditions are worse. If the Arctic Sea ice decreases significantly, TSR may also be considered an attractive possibility in the future.

In accordance with these tariffs, an icebreaker fleet is needed to keep routes and ports open. Russia charges high fees for the use of NSR.

In addition, there is a shortage of ports suitable for maritime trade and activities along the Arctic roads. Ports and ships need to be equipped with special teams, trained according to the conditions of the Arctic, and experienced personnel. It turns out that the PSR is not suitable for container transportation due to the insufficiency and lackness of ports that makes container exchanges infeasible all along the way.

The risk of crew being employed under unusual conditions is quite dangerous due to inexperience. Extreme weather conditions and potential iceberg collisions that could damage both ships and their crews are also a major risk.

There is a deep lack of infrastructure in the coastal areas around the Arctic roads. Most importantly, lack of communication, poor mapping of the area and its distance from essential resources such as fuel and food are primary concerns.

In addition, more technical and technological equipment and maintenance are required to provide high reliability and low cost to the ships, specially adapted to extreme weather conditions.

Concentration of navigation on North Pole routes triggers foreign policy issues. The interest shown by large maritime companies in recent years has found the same answer from the Arctic countries. Numerous claims cause uncertainties about the legal status of some roads: it is still unknown whether NSR should be considered as inland waters, territorial waters or international straits. Most importantly, if some parts of the NSR are claimed to be inland water, the passing ships will lose the right to innocent passage.

Finally, the environmental policies in the Polar Code should be taken into account in order for the North Pole, which is also known as the Polar Silk Road, to become the new axis of intercontinental transport. These restrictions will become more stringent as the market grows to preserve existing nature and wildlife.

For the past five years, China has been trying to put its diplomatic and economic stamp on the North Pole since 2018, with the so-called 'Polar Silk Road' method. The innocent and practical basis of this road is associated with connecting the Pacific Ocean to the Atlantic Ocean in less time consuming way by making less voyage from the north, which has become increasingly warmed due to global warming and arctic melting. Making it suitable for sea trade with softer climatic conditions, to establish infrastructure and contribute to the development of maritime trade through other new projects.

The success of PSR does not only depend on the financing and logistics of its various components, it also depends on how the potential political thought between the polar states, who are also in the position of building blocks, has developed.

In the first few years since the Chinese government announced the first steps to build the project, known as the Belt and Road Initiative BRI, in 2013, the North Pole started experiencing climate change and ice erosion. This way to make natural conditions more favorable, PSR would be added on top of the various projects and investments along with Africa, Europe and Eurasia as a key component of the advanced economic partnerships Beijing wanted to develop.

China began to quietly build its Arctic diplomatic policies. Until a few years ago, China took a 'wait and see' approach to connect the North Pole with Belt and Road. In fact, there were signs that China's North Pole would be added to the BRI repertoire. BRI is one of Beijing's projects aimed at achieving a priority for economic diplomacy.

The North Pole for China may not only represent a potentially lucrative shipping route, but can also be considered that China likes to play a role in the renewable energy and green technology industry in the Scandinavian region.

Greater clarity on how PSR would fit on the larger BRI network has been achieved through the publication of Beijing's Arctic Policy. Beijing outlined the scientific and economic interests it planned to develop in the north.

Expressing that she hopes to work with all parties to build a PSR by developing Arctic shipping routes, China has encouraged its investors to study in legal commercial trials to open up commercial and regular shipping operations for these routes.

As the PSR continues to evolve, it is undeniable that what China is seeking is to introduce markets for Chinese goods, investments and technology, and like to integrate with the BRI project, including major regional advanced diplomatic ties. The shortest Arctic seaway between China and Europe is in the north of Siberia and due to its various economic-political cooperation, Russia is by far the leading beneficiary of PSR policies.

Most of the economic agreements on PSR between China and Russia have been in the energy sector due to the Yamal Liquefied Natural Gas (LNG) project, supervised by the Russian company Novatek (НОВАТЭК) in Western Siberia.

Beyond energy, relating to PSR, potential Russian Arctic infrastructure projects took Chinese attention. However, the situation related to the COVID-19 virus and the closure of the Sino-Russian border could disrupt the new Arctic cooperation, at least in the short term.

The situation of PSR countries outside Russia is complicated. The only state that has officially logged in to BRI is Moscow. The United States, especially under its current government, is unlikely to be compatible with BRI, and America's attempts to create an alternative to BRI have been going on for a long time. States such as Canada, Sweden, Finland, Iceland, Norway want to maintain bilateral relations with Beijing, but are exposed to US raids. There are many existing and potential giant projects in the region such as construction, railway, technology, energy, pipeline, and maritime, which will cause technological, economic and strategic concerns that concern many sectors in which China is interested and involved. The decisions to be made by countries are beyond simple and independent business decisions. Three of the countries that are the interlocutors of the project are the powers that are the first three biggest in the world.

Despite the misunderstanding and conflicts, PSR policies are likely to continue and maritime transport is central to China's PSR interests. What is important in this case is whether Beijing can manage the economic diplomacy needed to continue to play a role in the construction of this glacial road and whether it is aware of the political storms that appear and will arise in the region as the general interests of the Arctic Region continue to expand and deepen.