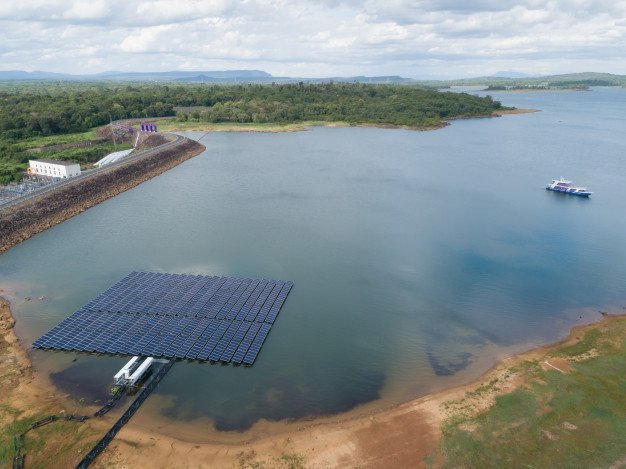 Floating solar power plant, refers to a solar power generation facility built on a floating structure in a,  artificial or natural, calm water basin such as a lake or a bay.

Years after the nuclear power plant disaster in Fukushima, the Japanese are looking for smart ways to double their renewable energy production by 2030. They started these studies with solar power plants floating in the water.

Photovoltaic method is the most important renewable energy after hydroelectric and wind energy, installed in about 100 countries.

This technology has been growing rapidly in the renewable energy market since 2016. Analyzing the emergence of technology, the first 20 power plants of a few dozen kWp were built between 2008 and 2014.

Installed power reached 1.1 GW in 2018. However, the cost of a floating system is 20-25% higher than floor mounted systems.

Floating power plants seem 11% more advantageous than those on land.

There is no land consumption. The main advantage of floating PV plants is that they do not occupy any land other than the limited surfaces required for the electricity storage unit and grid connections. They provide a functional opportunity to prevent land consumption. Valuable land areas used for free solar farms can serve other purposes.

In countries like Japan where there are so many cities and land is difficult to find for solar panels, it becomes easier with floating solar panels.

Floating PV plants are more compact than land-based facilities, simpler to manage and easy to install and decommission. It does not require fixed structures such as foundations used for a land-based facility. The costs associated with land-based solar farms such as buying land, clearing, maintaining and flood insurance are much less.

This result depends on the climatic conditions and the area of the surface being coated. In arid climates such as Australia, this is an important advantage because about 80% of the evaporation of the covered surface is saved, which means more than 20,000 m3 / year / ha. This is a very useful feature if the basin is used for irrigation.

Water helps keep solar panels at a cooler level. Thus, both the effect and the life of the panels are longer.

Contributes to increasing solar cell efficiency. This means panels 11% more efficient than land-based PV systems due to the cooling effect of water.

It helps to minimize the risk of solar cell atrophy due to the cooler air at the surface.

A parallel advantage is the prevention of microscopic algae, which is a serious problem in industrialized countries, from overgrowing and forming colonies visible in nature, that is, controlling algae blooming. Partial lining of basins and reducing light on biofouling just below the surface, together with active systems, can solve this problem. It can positively contribute to the management problem of a watershed that is produced by or polluted by industrial activities.

Shading of the water and preventing the growth of bacteria such as giardia and cryptosporidium, algae growth restricted due to lowering the water temperature can be inhibited. The quality of the water is preserved.

Thus, water basins can be healthier and have more capacity.

A large floating platform can be easily rotated and perform vertical axis tracking. This process can be done without wasting energy and without the need for a complex mechanical apparatus as in land-based PV plants. Thanks to its practicality, a floating PV plant equipped with a monitoring system has a limited additional cost, while energy gain can range from 15% to 25%.

Many studies claim that putting solar panels in water provides a significant improvement in efficiency improvement. All these studies are not conclusive and their results are different. The reported energy gain ranges from 5% to 15%.

However, floatovoltaics also have potential disadvantages. Given the world’s limited experience with them, it’s hard to know how well the panels will perform in the long run. It is also unclear how floatovoltaic installations affect local wildlife and the ecosystem. In this case, the biggest obstacle to floatovoltaics is the unknown. It may take several years for floatovolatics to become commonplace.

Although not exhaustive, installations can be divided into three categories:

PV modules mounted on rafts made of plastic and galvanized steel,

PV modules made entirely of plastic, mounted on rafts.

The world’s first floating photovoltaic system was installed in a California winery in 2008, but the US currently lags behind other countries in floatovoltaic application.

A small fraction of the 100 existing floatovoltaic plants are in the US. Roughly 80 percent are in Japan, where limited land and roof space make water-based solar panels particularly attractive.

Since 1990, solar power has developed in Japan. Japan, the 4th most energy consuming country in the world, focused entirely on renewable energy as a state after the Fukushima accident.