Ana sayfa » The Rise and Fall of the Standard Oil Company 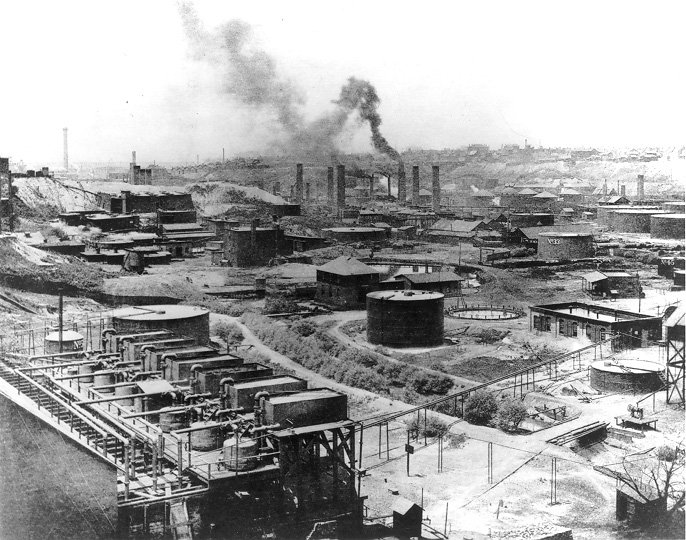 The Rise and Fall of the Standard Oil Company

The rapid rise of Standard Oil

In Ohio, the name Standard was chosen to imply the standardization of oil refineries and their products. Indeed, the 42-gallon oil keg was the design of Standard Oil of Pennsylvania in the 1860s.

However, the transportation cost of Oil is as important as the production cost. 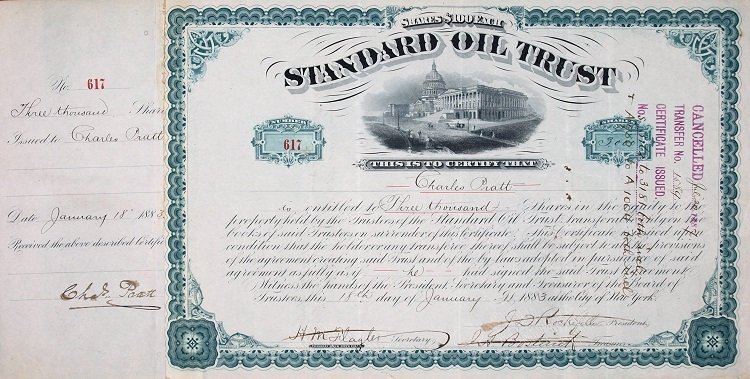 Rockefeller made a secret agreement with Cornelius Vanderbilt, one of the great owners of the American railroads, and promised to fill the railroad lines with oil. But Rockefeller eventually had more oil than Cornelius Vanderbilt could carry. Now he had to work with his rivals as well. For years, Rockefeller has consistently lowered his own shipping rates by pitting two railroad leaders, Cornelius Vanderbilt and Thomas A. Scott, as rivals. Vanderbilt and Scott unite and give Rockefeller a fixed rate, tying the Rockefellers’ hands. Rockefeller lays an interstate pipeline in response to this declaration of war. More than 4,000 miles of pipeline laid have damaged rail companies’ stocks so badly that a third of the country’s 360 rail companies perish. Although Standard Oil owns two-thirds of the oil carried by Thomas Scott’s railroads, he declared war on Standard Oil. It wanted to rival Standard Oil by establishing a new refinery and its own pipeline. The railway to Pitsburg, where Standard Oil pipelines could not extend, is still under the control of Thomas Scott. Standard Oil closes all its refineries in Pitsburg at a loss, leaving the Pennsylvania railroad unloaded. This move would damage Standard Oil millions of dollars, but the Pennsylvania Railroad lost $10 million in turnover within 3 months when oil was not transported through the railroads. Tom Scott is forced to lay off thousands of workers, and the rest have their salaries cut. Workers revolt, starting the Pennsylvania Railroad Rebellion. The damage is so great that the railroad is closed. From all this, Tom Scott lost so much that he sold all the assets of his own company, Empire Shipping Company, to Standard Oil.

By 1877, 90% of the American oil market was under the control of Standard Oil and there were no obstacles to growth. Before Rockefeller turned 40, he became America’s most powerful man.

Thomas Edison invents the electric light bulb in 1879. Edison and John Pierpont Morgan together form the Edison Power Company. In the introduction of the light bulb, Edison said, “We will make electricity so cheaply that only the rich will light candles”. The candle will no longer be used as a necessity, but as an accessory. It is only a matter of time before the bulb replaces the gas lamps in homes.

Rockefeller started to make anti-electric propaganda in order not to give up on oil and to secure the oil empire. He conducted studies that explained the dangers of electricity to the American people.

However, at the same time as Rockefeller tried to avoid the use of electricity, the first gasoline powered engines were made. While everyone sees oil as mud, a rabbit is out of the hat and it’s time for Rockefeller to get the real return on his investment in oil.

The real commercial importance of oil emerged after Henry Ford introduced the first mass-produced automobile. Coal has lost its dominance to oil as an energy source. As the number of gasoline-powered vehicles increased, Standard Oil continued to add wealth to its wealth.

Historian David Chalmers wrote in his introduction to Norton’s abridged edition of Tarbell’s The History of the Standard Oil Company: “John D. Rockefeller and his associates did not build the Standard Oil Company in the large chambers of Wall Street banks and investment houses, they kept their stocks. they did not water and did not cheat the market. They fought not through bribery, blackmail, espionage, but through price-cutting, and perhaps more importantly, control with ambitious, never lazy organization and production efficiency.

Many of these methods were later exposed and found to be unethical and in some cases illegal. However, during the 1870s and 1890s, Standard Oil acquired many small and large oil companies and established regional companies across the United States. In 1882, Rockefeller and his associates further consolidated their dominance by transforming Standard Oil into a trust with nine boards of trustees managing the company on behalf of all shareholders. In 1885 the foundation moved to New Jersey to take advantage of favorable arrangements. Another office in New York managed most of Standard Oil’s overseas operations.

In 1890, Ohio Senator John Sherman introduced an antitrust law in Congress. Although US Presidents Grover Cleveland and William McKinley did not enforce the law in the 1890s, the Sherman Act became the source of American antitrust policies a decade later. In response, the Standard Oil Trust changed its name to Standard Oil Interests with 20 companies and made some cosmetic adjustments, but still central power remained with a holding company first in New York and later in New Jersey.

However, the depression of 1893-97 that hit the middle and lower income classes and the rise of the intellectual movement 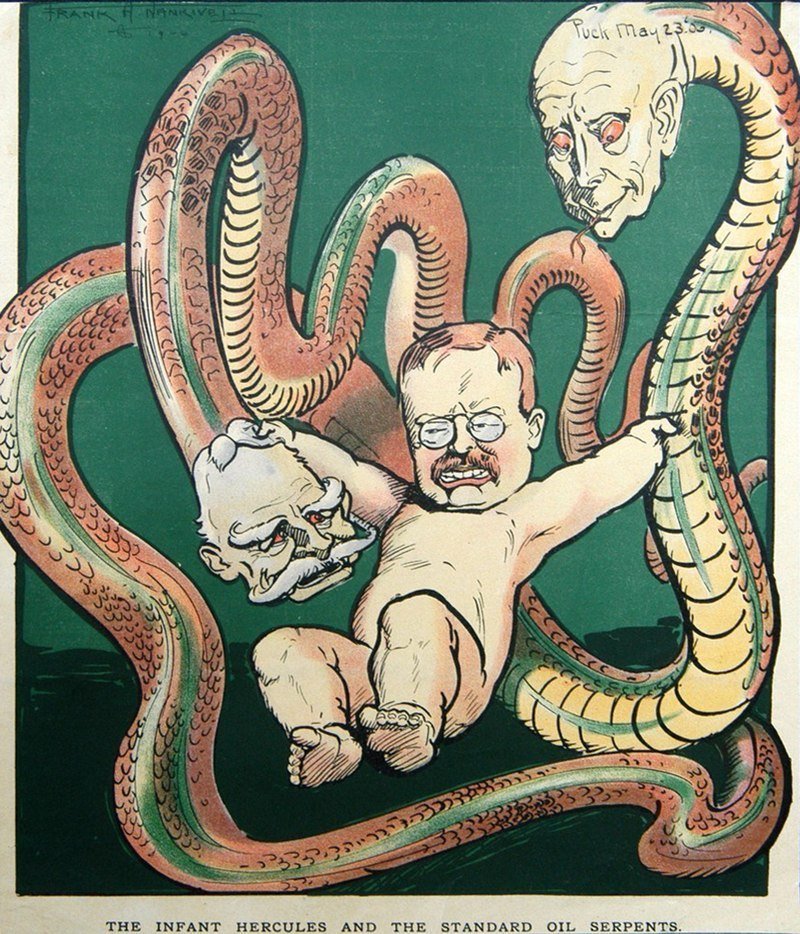 against trusts and monopolies pushed politicians to rein in the economic monopoly power of corporations. It was in this mature environment that Tarbell’s book emerged and reinforced public and political awareness of Standard Oil. The period of 1890–1914 is sometimes referred to as the Progressive Era in American history, as it promoted anti-corruption policies as well as reforms that promoted the middle class, science and education, women’s rights and social liberties. If Rockefeller was an icon of the Gilded Age, Tarbell and his work were the epitome of the Progressive Age.

President Theodore Roosevelt of the Republican Party was one of the most powerful political leaders to push for Progressive reforms. When American President McKinley was assassinated and died in 1901, the 42-year-old Vice President was succeeded by Theodore Roosevelt, who won the Nobel Peace Prize in 1906 and was a successful president.

When Roosevelt ran for president, one of the top issues on his agenda was to limit the monopoly’s reign over the American economy. Although Standard Oil contributed large sums of money to the Republican Party campaign, Roosevelt ordered his extradition. His management then launched an investigation into Standard Oil’s activities.

The company’s top executives, John D. Archbold and Henry H. Roger (Rockefeller had retired in 1897) visited the White House in March 1906 to reason with Roosevelt, but it apparently didn’t work out because in November 1906. and US Attorney General Charles Bonaparte, St. Louis filed an antitrust suit against Standard Oil in federal court. The company has come under fire for several lawsuits and negative media coverage. A lawsuit against Indiana Standard Oil eventually brought Rockefeller himself to a federal court in Chicago in July 1907. He played someone with amnesia. The court fined, however, the company remained intact.

Ida Tarbell, then editor of The American Magazine, wrote articles titled “Roosevelt vs. Rockefeller” in 1907-1908. Always trying to keep a low profile, Rockefeller responded by publishing his memoir Random Reminiscences of Men and Events in 1909.

After three years of court proceedings that included 14,495 pages of documents and the testimony of 444 witnesses, in 1909 a four-judge federal court decided against the Attorney General’s case and Standard Oil. The Sherman Anti-Trust Act would apply. Roosevelt, who refused to be re-elected for the presidency and left this post for the second time, voluntarily at the end of 1908, was delighted with this news. Standard Oil appealed the case. The next stop was the Supreme Court, which upheld the federal court’s decision on May 15, 1911. Chief Justice Edward White gave Standard Oil six months to dissolve itself as a single entity and split into several companies with independent boards of directors.

The New thirst for Oil

At that time, Standard Oil was operating on a very large scale: refining about 75% of US crude and marketing more than 80% of domestic kerosene.

In July 1911, Standard Oil announced its new structure: It would be split into 33 companies, some large and some small. However, in doing so, it enabled new companies to share the market rather than compete with each other, which was to be expected. How would a court force a man to compete with himself?

Shares in ‘Baby’ Standards were distributed to Standard Oil shareholders on a pro-rata basis with the original shares. Rockefeller owned about a quarter of the Standard Oil stock. Some people thought that the company would sell its shares because its value would drop. But Rockefeller knew his business better than anyone.

When oil production began in the 1860s, the oil was mainly used for kerosene lamps. Thomas Edison’s invention of the electric light bulb in the 1880s seemed to eclipse the oil industry. However, Henry Ford’s automobile design in the 1900s created a new oil starvation in the form of gasoline. Therefore, within a year of Standard Oil’s dissolution, the stock market value of its spin-off companies doubled. Rockefeller, who fell on his feet again, became the first American billionaire in a short time.

Despite Standard Oil’s dominance of the American market from the 1880s to the 1900s, one important fact should not be overlooked: Oil prices remained below pre and post prices during this period, at around $1 per barrel. It seems that it is market expansion (cheap oil) rather than higher oil prices that financially fuels Standard Oil’s growth. While the name Standard Oil is a part of history, the godfather figure persists, as many of the major US oil companies operating today trace their origins to this enormous oil establishment.

The reason why we deal with the subject is significant. Such formations have been embodied in different forms throughout history, and still, with the enthusiasm of monopolization, new structures continue their commercial activities in the sense that they assimilate from time to time to the country, to the land, to the west, without caring about the damage they cause to their customers and credit resources from time to time, in order not to give an opportunity to competitive companies.

In the global Bunker sector, which we are in, a holding company that has acquired more than fifty companies continues its activities. The determination that history repeats itself is very meaningful in this regard, which means that the habit of cheating from the past continues!