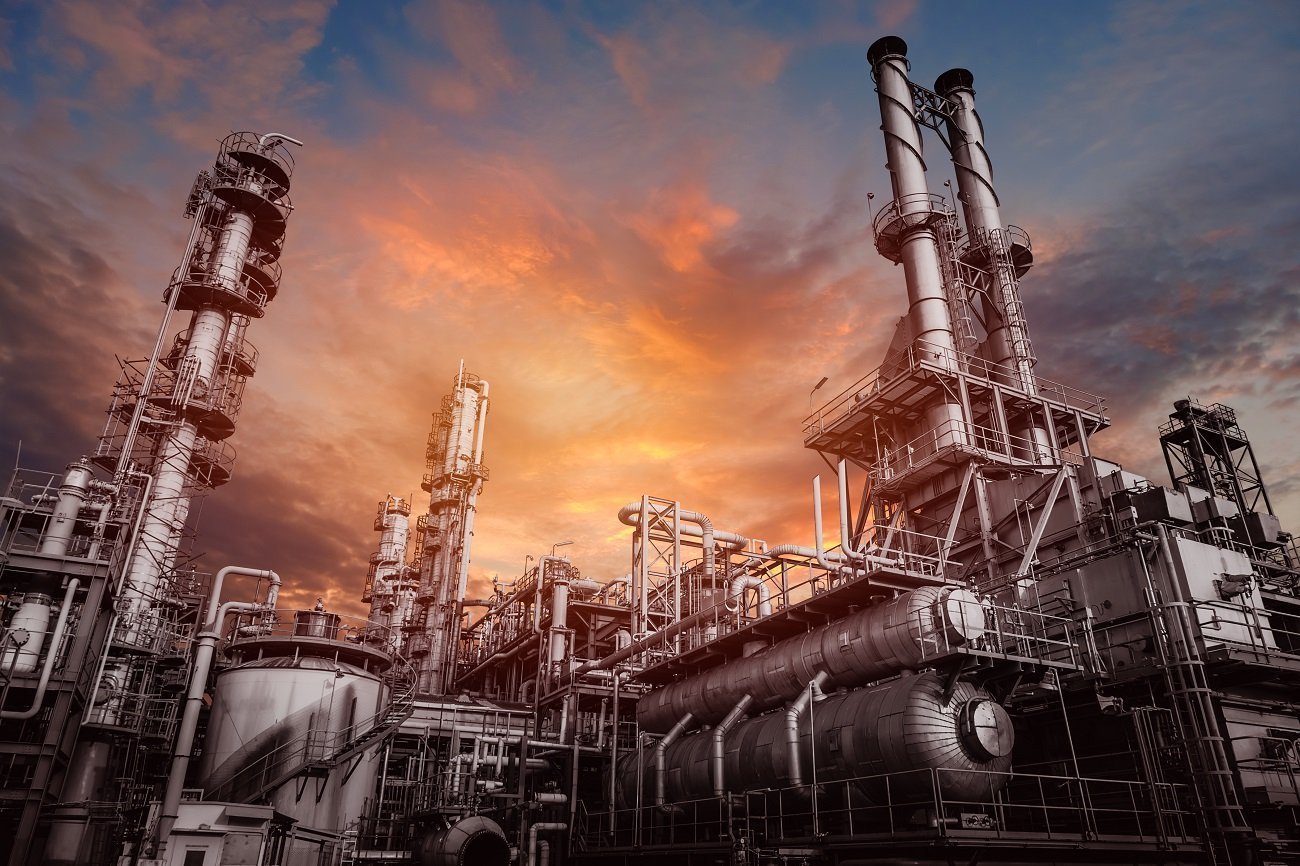 Oil refinery is an industrial process facility where crude oil is refined into more useful products such as asphalt, heating oil, fuel oil, gasoline, diesel, jet fuel, naphtha, gasoline, kerosene and liquefied petroleum gas. Crude oil is stored in tanks for processing as the typical feedstock of refineries. Often there is an oil storage area in or near the oil refinery for the storage of incoming crude oil and bulk liquid products.

Oil refineries are visually and functionally industrial complexes equipped with various, large diameter piping. Refineries benefit out of the facilities of technology in many ways. Modern oil refineries today can process more than 800,000 barrels of oil a day.

The world’s first systematic petroleum refinery was built in Ploiești, Romania in 1856 using the abundant oil available in Romania.

In North America, the first oil well was drilled in 1858 by James Miller Williams in Oil Springs, Ontario, Canada. The US oil industry began in 1859 when Edwin Drake discovered oil near Titusville, Pennsylvania. In the early twentieth century, the introduction of the internal combustion engine and its use in automobiles created a market for gasoline that was the impetus for fairly rapid growth of the petroleum industry.

The first major refinery opened in Romania was seized by Nazi Germany during World War II. It was bombed by the Allied Powers during the war. 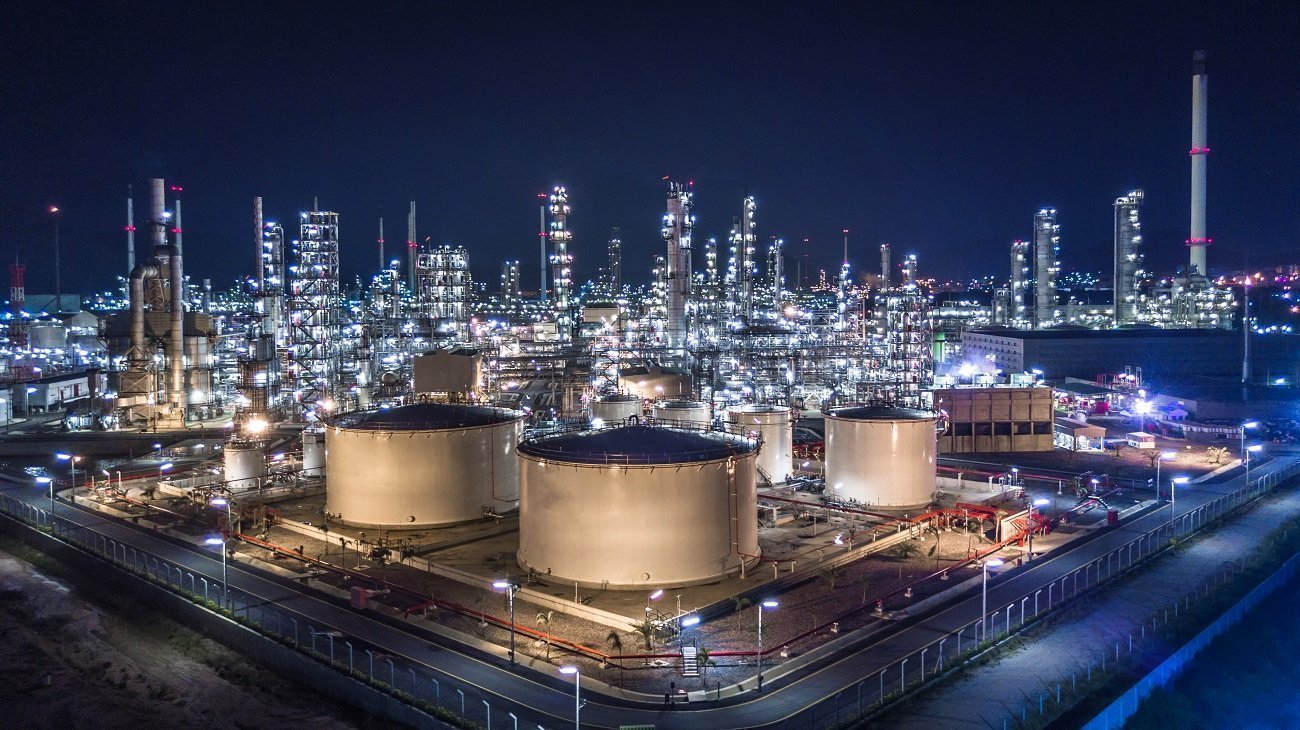 In the refinery, hundreds of different hydrocarbon molecules in crude oil are divided into components that can be used as fuel, lubricant, and raw material in petrochemical processes that produce products such as plastic, detergent, solvent, elastomer, nylon, polyester and fiber.

Crude or unprocessed oil is generally non-functional in industrial applications, but “light, sweet” (low viscosity, low sulfur) crude oil was used directly as a burner fuel to generate steam for propulsion of offshore vessels. However, lighter elements create explosive vapors in fuel tanks and are therefore dangerous for warships.

Petroleum fossil fuels are burned in internal combustion engines to power ships, automobiles, aircraft engines, lawnmowers, motorcycles and other machinery. Different boiling points allow hydrocarbons to be separated by distillation. Since lighter liquid products are in great demand for use in internal combustion engines, modern refineries convert heavy hydrocarbons and light gas elements that can not be used as it is, or not logical to be use, into these high-value products.

Petroleum can be used in a variety of ways because paraffins, aromatics, naphthenes (or cycloalkanes), alkenes, dienes, and alkynes contain hydrocarbons of various molecular mass, forms, and lengths. Molecules in crude oil contain different atoms such as sulfur and nitrogen. Hydrocarbon is an organic compound containing hydrogen and carbon elements. It is the most common form of molecules of varying length and complexity, composed of hydrogen and carbon atoms and a small number of oxygen atoms. The differences in the structures of these molecules are responsible for their changing physical and chemical properties, and it is this diversity that makes crude oil useful in a wide variety of applications.

Hydrocarbons; It can be in solid, liquid or gas form. When it comes to hydrocarbons, the first thing that comes to mind is fuels. Because gasoline, diesel and LPG used in vehicles; All fuels used in homes such as natural gas, coal, tube gas and fuel oil are mixtures of hydrocarbons.

What is Oil Refinery?

In brief, oil refineries are large-scale distilleries that process hundreds of thousands of barrels of crude oil every day. Because of their high capacity, most of their units are large-scale plants that produce continuously for months or years in routine, steady state and form, as opposed to batch processing. They are the locomotive facilities that serve the main arteries of the country, industry and sectors that feed the economy. The lack of oil refineries in a country or their limited quantity or quality increases the dependence of that country on every platform.

Oil refineries also produce a variety of intermediates such as hydrogen, light carbons, reformate and pyrolysis gasoline. These are usually not moved but instead are blended or processed on-site. Chemical plants are therefore very close to oil refineries.

Refineries can produce different proportions of petroleum products depending on the composition of the crude oil and the demands of the market. The largest share of petroleum products are used as “energy leaders”, ie various grades of fuel oil and gasoline. These fuels include gasoline, jet fuel, diesel, heating oil and heavier fuel oils or can be blended. It can also use to produce heavier fractions, asphalt, tar, paraffin wax, lubrication and other heavy oils. Refineries also produce chemicals needed to produce a variety of chemical processes, plastics, and other useful materials.

In the last stage, refineries carry out the service of short-term storage of products, making them ready for bulk loading on trucks, wagons, barges, ships.

How Does the Refinery Work? How is crude oil processed?

The crude oil distillation unit (CDU) is the first processing unit in almost all oil refineries. CDU distills the incoming crude oil into its various fractions at different boiling ranges and each is then processed in other units. CU is commonly known as atmospheric distillation unit as it operates slightly above atmospheric pressure.

Crude oil consists of a mixture of hydrocarbons and the distillation process aims to separate this crude oil into broad categories of its constituent hydrocarbons or “fractions”. Crude oil is first heated and then the heating temperature increased to/about 398 ° C in a fuel-fired furnace and directed to a distillation column, also known as retort, where different products are boiled and recovered at different temperatures.

The cooling and condensation of the top of the distillation tower is achieved partially by exchanging the heat with the incoming crude oil and partially by an air or water cooled condenser. The fractions extracted from the side of the distillation column at various points between the top and bottom are called side sections. Each side section is cooled by changing the heat with the incoming crude oil. All fractions are sent to storage tanks for further processing.

Lighter products such as butane and other liquid petroleum gases (LPG), gasoline blending components and naphtha are recovered as top distillates at the lowest temperatures from the distillation column. Mid-range products include jet fuel, kerosene, and other distillates (such as domestic heating oil and diesel fuel). The heaviest products, such as remaining fuel oil, are sometimes recovered at temperatures above 1,000 degrees Fahrenheit.

A plant seeking party to build an oil refinery or chemical plant should consider the following issues:

Refineries that use large amounts of steam and cooling water must have ample water supplies. Oil refineries are therefore often located near rivers or on a sea shore. This location also provides access to transport by river or sea. The advantages of transporting crude oil by pipeline are obvious, and oil companies often transport large volumes of fuel by pipeline to distribution terminals. For small output products, the pipeline may be impractical and wagons, road tankers and barges, sea tankers are used.

During the refining process, a number of harmful chemicals are released into the atmosphere, accompanied by a remarkable odor that makes the refinery’s presence sharp. Refineries mostly become subjects of industrial concerns and accident risks such as air pollution, waste water, fire and explosion threatening living things and environmental health. The effects of creating noise pollution due to industrial noise cannot be denied.