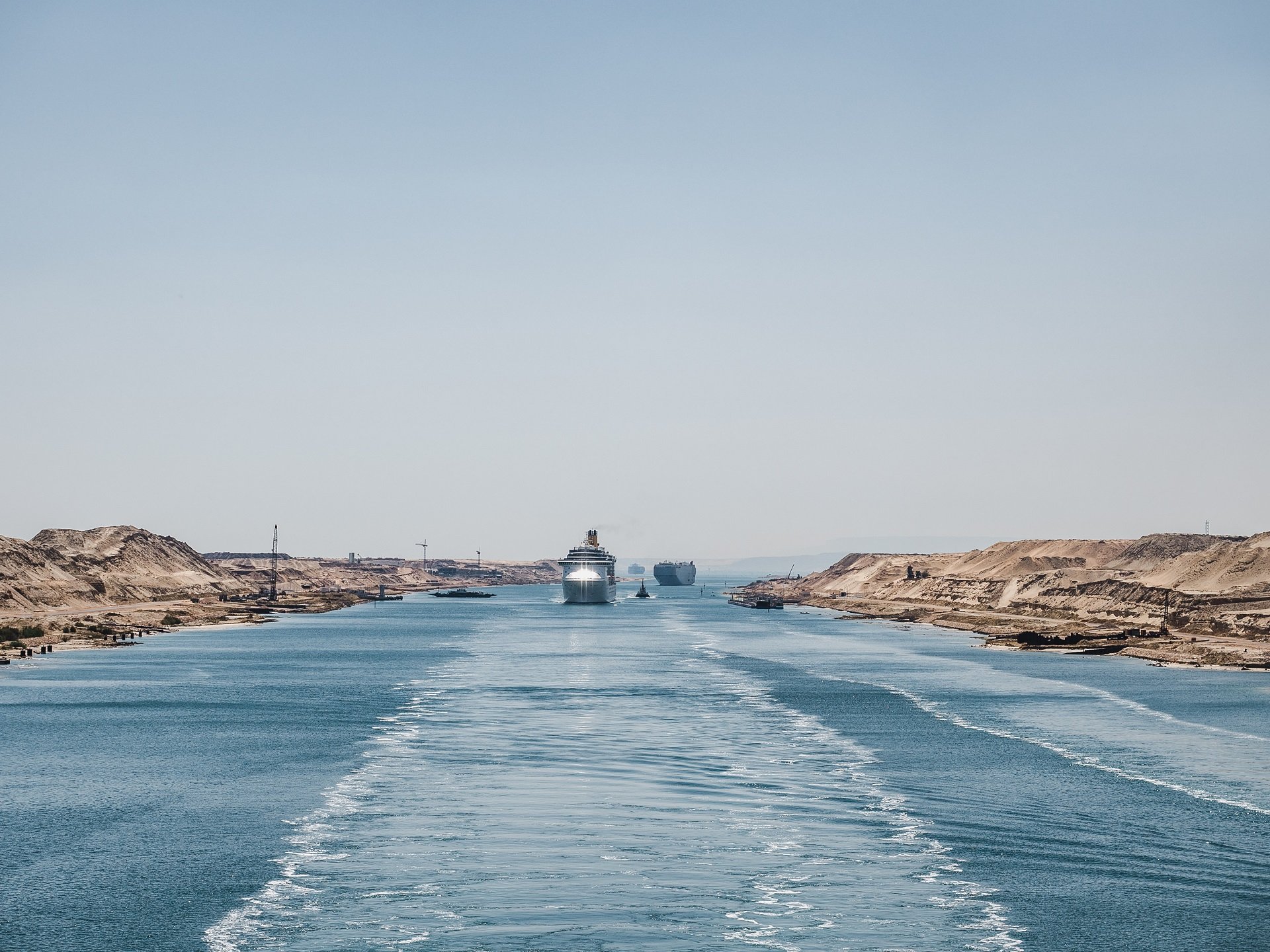 Located in the west of the Sinai Peninsula, the Suez Canal is 193.30 km (120.11 mi) long, including the northern and southern access channels, and 313 meters wide at its narrowest point. It stretches from the northern end of Port Said to the southern end of Port Tevfik in the city of Suez. The canal, as being the most important waterway in the world, allows maritime transport between Asia and Europe without the necessity to travel around the continent of Africa.

The idea of ​​connecting the Mediterranean to the Red Sea goes back to the Pharaohs in the first era. The need to build such a canal arose because the ancient seafarers traveled long distances and distances in trade.

The Suez Canal is an artificial sea-level waterway in Egypt that connects the Mediterranean Sea to the Red Sea and divides Africa and Asia. The canal is part of the Silk Road that connects Europe to Asia.

The stream changes with the tide in Suez and flows north in winter and south in summer. The original canal had a single-lane waterway and contained no locking system.

During the initial research, it was widely accepted in terms of the technique of its construction and the possibilities it offers to the global economy. Compared to other channels, the accident rate is almost zero. It is possible traveling through day and night time.

In 1854 and 1856 Ferdinand de Lesseps received the permission of establishing a company from Said Pasha the Khedive of Egypt and Sudan to build a canal open to ships of all nations. The company would be operating the canal for 99 years from its opening.

Corvée is a form of intermittent, unpaid, forced labor of limited periods in nature. Typically, only a certain number of days are worked each year. The application of the term is not limited by time and place. The term is most typically seen in medieval and early modern European practices, where vassals or persons under the rule of another were expected to work, often for a feudal landowner or monarch.

It is a form of legal, compulsory labor imposed by a state for the purpose of public works and/but seen as drudgery by some. It represents a kind of taxation. This form of employment does not require that those who are employed be rewarded with a benefit or cash in return for their labor.

The Corvée were applied in modern and ancient Egypt, ancient Sumer, ancient Rome, China, Japan, throughout continental Europe, the Inca civilization, Henry I and American-occupied Haiti (1915-1934), and in Portugal’s African colonies until the mid1960s.

According to some sources, it is estimated that more than 1.5 million people from various countries were employed during its construction, more than 30,000 people were employed in the canal from time to time, and tens of thousands of workers died from cholera and similar epidemics.

It is said that until the prohibition of forced labor in 1863, thousands of people were forced to dig the canal with pickaxes and shovels. Following this ban, the Suez Canal Company had to bring in custom-built steam and coal-fired equipment to build the canal. With the help of these heavy machineries, the project received the necessary support.

On November 17, 1869, the canal was officially opened and the waters of the Mediterranean get into each other with the Red Sea. It offered ships direct access possibility between the North Atlantic and northern Indian oceans via the Mediterranean and Red Seas, which is shorter than the long South Atlantic and South Indian ocean routes. The journey distance from the Arabian Sea to London was shortened by approximately 8,900 kilometers (5,500 mi), or 10 days at 20 knots nautical miles (37 km/h; 23 mph).

During the opening, there were criticisms that the depth of the sections of the canal was not as great as promised, the deepest section was not always clear and this led to the risk of grounding. When opened to shipping transportation, the Suez Canal was 200 to 300 feet on the surface, 72 feet wide, and 25 feet deep at the bottom.

On the morning of November 17, a convoy of ships led by L’Aigle entered the canal. On the first day of the crossing, the French ship Péluse ran aground. The ships following Péluse had to moor in the canal until Péluse got free the next morning. The convoy set off again on the morning of 19 November for the remainder of its journey to Suez. S.S. Dido became the first ship to cross the Channel from south to north.

Despite overcoming numerous technical, political, and financial problems, the final cost was more than double the original estimate. The Suez Canal Company was in financial trouble. The remaining works were only completed in 1871, and traffic fell short of expectations in the first two years.

The canal is operated and maintained by Egypt’s state-owned Suez Canal Authority (SCA). According to the Constantinople Convention, it can be used by any merchant or warship, regardless of flag, in times of war as well as in times of peace. 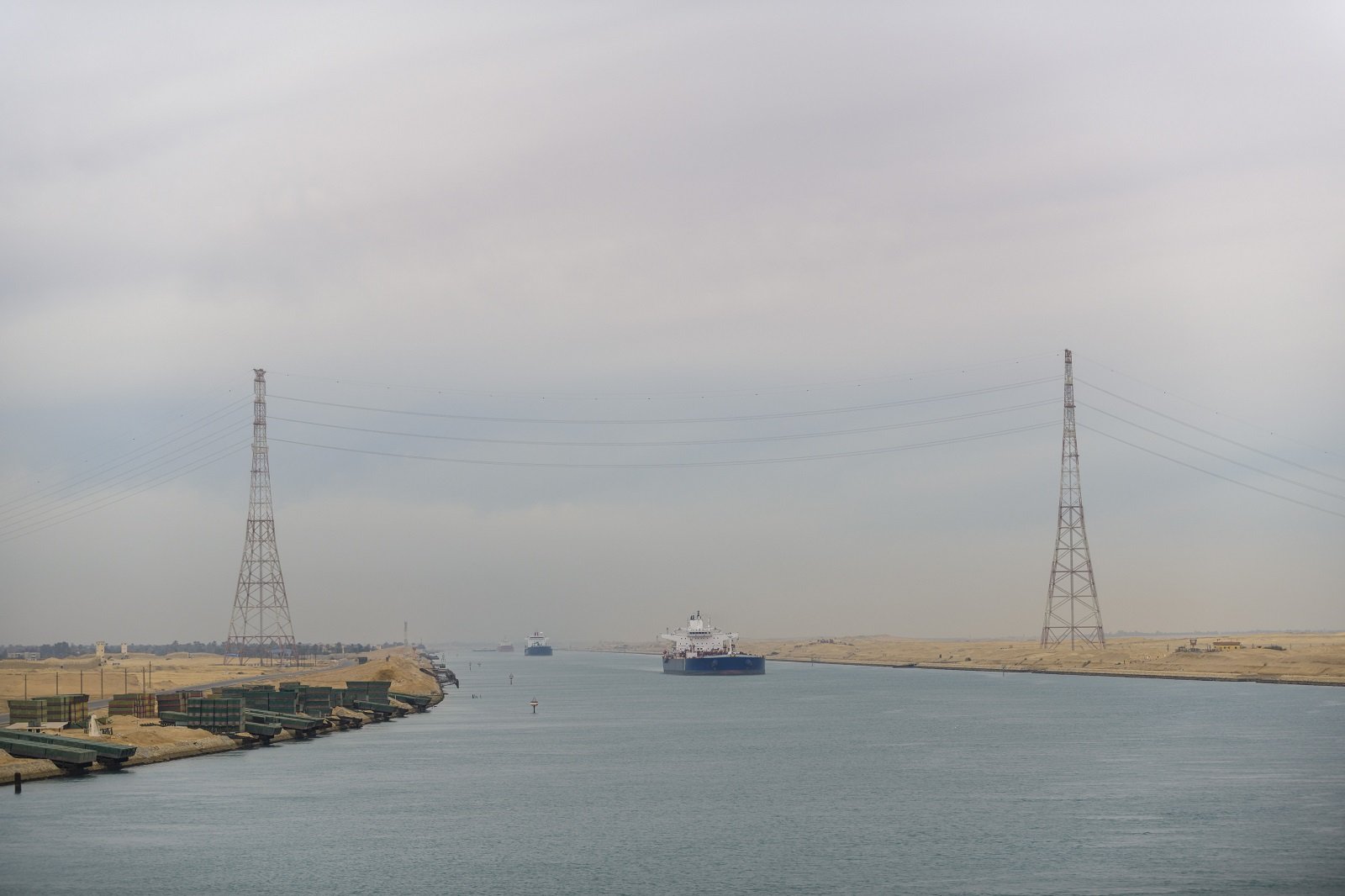 The geopolitical role of the channel

The canal has played an important military and strategic role in every period. The Egyptian and Israeli navies, which have bases on both the Mediterranean and Red Sea coastlines, have a special interest in the Suez Canal, as it is a strait point that shortens the distances between the continents.

Despite being a globally accepted project, the UK feared that a public channel could hamper Indian trade. The British government opposed the project from beginning to end. The British, who controlled both the Cape route and the Overland route to India and the Far East, favored the status quo, given that such a channel could upset the balance of commercial and maritime superiority.

The construction of the canal was one of the causes of the Panic of 1873 in Great Britain since goods from the Far East had until then been stored in British warehouses, being transported in sailing ships from the south around the Cape of Good Hope.

The canal had an immediate and dramatic impact on world trade. It also combined with the American transcontinental railroad completed six months ago, enabling the world to be surrounded in record time and played an important role in the increase of European colonization of Africa.

The European Mediterranean countries in particular benefited economically from the Suez Canal as they now have much faster connections to Asia and East Africa than to Northern and Western European maritime trading nations such as Great Britain, the Netherlands, or Germany.

The country that benefited most from the Mediterranean was Austria-Hungary, which participated in the planning and construction of the canal. Austria’s largest shipping company, Österreichischer Lloyd, experienced rapid expansion after the canal was completed, as did the then Austrian-owned port city of Trieste. The company was a partner of Pasquale Revoltella Compagnie Universelle du Canal de Suez, co-founder of Lloyd’s vice president.

The Convention of Constantinople in 1888 declared the canal a neutral zone under the protection of the British, who invaded Egypt and Sudan to suppress the Urabi Revolt against the rule of Khedive Tewfiq. The revolt lasted from 1879 to 1882. The British defended the strategically important passage against an Ottoman attack in 1915 during the First World War. Under the 1936 Anglo-Egyptian Treaty, Britain retained control of the canal. The canal became strategically important again in the 1939–1945 Second World War, and Italian-German attempts to capture it was repulsed during the North African expedition when the canal was closed to Axis ships.

In 1951 Egypt rejected the agreement and in October 1954 the United Kingdom agreed to withdraw its troops. The withdrawal was completed on July 18, 1956.

After Egypt closed the Suez Canal on June 5, 1967, the canal remained closed for eight years and reopened on June 5, 1975. Fifteen cargo ships are known as the “Yellow Fleet” remained stranded in the canal until 1975.

Expansion of the channel

In the summer of 2014, months after taking office as President of Egypt, Abdel Fattah el-Sisi ordered the expansion of the Ballah Bypass. The project was called the New Suez Canal because it allowed ships to cross the canal in both directions at the same time. The project cost more than £59.4 billion (US$9 billion) and was completed within a year. Sisi announced the opening of the expanded canal at a ceremony on 6 August 2015.

The expansion aimed to nearly double the capacity of the Suez Canal from 49 to 97 ships per day. This £59.4 billion (US$9 billion) project was financed exclusively by interest-bearing investment certificates issued to Egyptian institutions and individuals.

The Suez Canal Authority opened the new side canal in 2016. Located on the northern side of the eastern extension of the Suez Canal, this side-channel serves the Eastern Terminal for ships to dock from the terminal.

Ever Given accident reminding the importance of Suez in global trade

On March 23, 2021, at 07:40 local time, the ship Ever Given, operated by Evergreen Marine, ran aground en route from Malaysia to the Netherlands after strong winds allegedly drove the ship off course. The stranded Ever Given turned on its side, completely blocking the canal.

Although part of the length of the channel is parallel to an older, narrower channel that could be used to bypass obstacles, this accident occurred on the section with only one channel.

The International Chamber of Shipping (ICS) estimates that up to $3 billion in cargo passes through the Suez Canal every day. Many economists and trade experts reminded us how important Suez is for global trade. The incident greatly affected the global economy due to goods stuck in the canal. This event delayed the arrival of precious commodities such as oil shipments to their destinations, causing huge commercial losses.

It was said that the congestion would affect shipping schedules around the world. Some shipping companies have considered switching their ships to a much longer route around the Cape of Good Hope. The first container ship to do so was Ever Given’s sister ship, Ever Greet.

The ship, which ran aground, refloated on 29 March. Within a few hours, cargo traffic resumed and the backlog of about 450 ships was gradually unraveled.

After the Suez Canal was reopened to traffic, it was announced that 285 cargo ships passed through the canal without any problems as of noon on March 31. It has been announced that all 175 cargo ships waiting to pass through the canal will pass by April 2. On April 2, 2021, Usama Rabie, head of the Egyptian Suez Canal Authority, said that the damage caused by the blockage of the canal could reach approximately $1 billion.

While the blockage of the canal damaged the reputation of the Suez Canal, it caused land trade routes such as the historical Silk Road to come to the fore again. The ship was rescued from the place where it was stuck after about 1 week of work. It was thought that the damage of this process to world trade was $100 billion.

According to the statements of the Suez Canal Authority announced that Egypt lost about $95 million from the crisis and they demanded $916 million from the responsible company as compensation. The ship and its goods were confiscated until a settlement reached.

After the incident, the Egyptian government announced that they would widen the narrow sections of the canal.

On September 9, 2021, the channel was briefly shut down again by MV Coral Crystal. However, this ship was free within 15 minutes, causing minimal disturbance to other convoys.