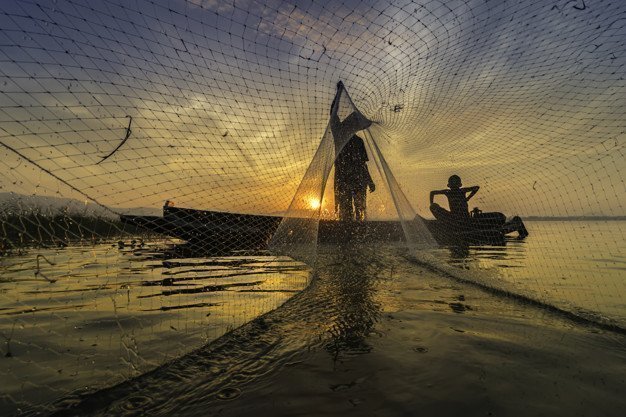 Ghost nets are fishing nets left, abandoned or lost in the ocean by fishermen. Nearly invisible in low light, these webs can drift offshore and lurk on rocky reefs. They may wrap up other creatures, including fish, dolphins, sea turtles, sharks, dugongs, crocodiles, seabirds, crabs, and divers. Nets that are wandered in sea , or stuck at the bottom of the sea restrict the movement of living things, causing them to become unable to feed, injury, mutilation, suffocation and infection.

Some commercial and local fishermen use nets suspended in the sea with floating buoys along a beach. In this way, they can create a vertical wall hundreds of meters long, from which any fish of a certain size range can be caught. In practice, these nets are collected by fishermen after fishing, the catched are removed, and stacked for reuse. 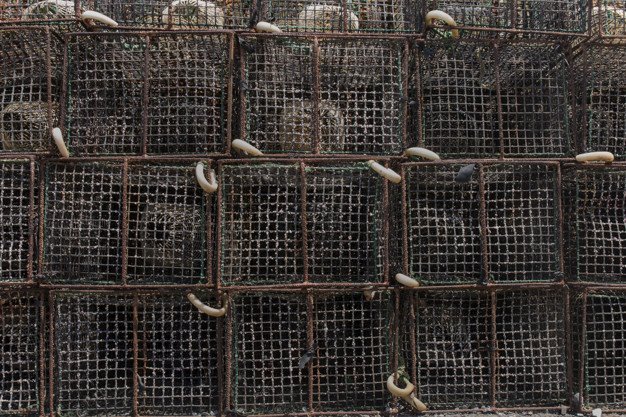 If this is not done, the net may continue to catch fish until the weight of the prey exceeds the buoyancy of the surface. The net then sinks and is consumed by fish and other sea creatures, bottom-dwelling crustaceans and other fish. The buoys then pull the net up again and the loop continues undetected. Given the high-quality synthetic fishing net equipment in use today, destruction can continue for a long time and turns into a massacre.

The problem isn’t just networks, it’s ghost fishing gears in general; Old-fashioned crab traps without the necessary decomposition panels settle on the floor, becoming self-baiting, becomes killer traps that continue to catch crabs there. Plucked fish hooks can be deadly to a variety of creatures, including birds and marine mammals.

Over time, the nets become more and more tangled, making it more difficult for sea creatures to escape from the trap area.

The most important factor of this danger is human. The nets that the fishermen who hunt in the seas and lakes unconsciously leave, stuck on the rocks or lost make life at the bottom more difficult day by day. Fishermen sometimes abandon worn-out nets because this is the easiest way to get rid of them. While they are expected to be aware that they have closed their breadbasket, the damage this simple method of salvation has caused to sea creatures, the ecosystem and future generations is not taken into account.

Ghost nets, which keep their form intact in water for years, affect many terrible consequences, from the life of sea creatures to the pollution of drinking water, as follows.

The ecosystem is depleted

A scavenger environment is created due to the creatures caught and dying in these nets, and this causes the breeding of creatures and population that fed by rotten things.

There are other fish and creatures that consume dead fish as food. Examples of these are moray eels, sea turtles, seals and pufferfish. However, it is also seen that these creatures are caught and die from time to time in the same net.

While every living creature is a loss for the ecosystem, it means the nourishment and survival of another living thing. However, these creatures are generally some species that have no economic value. 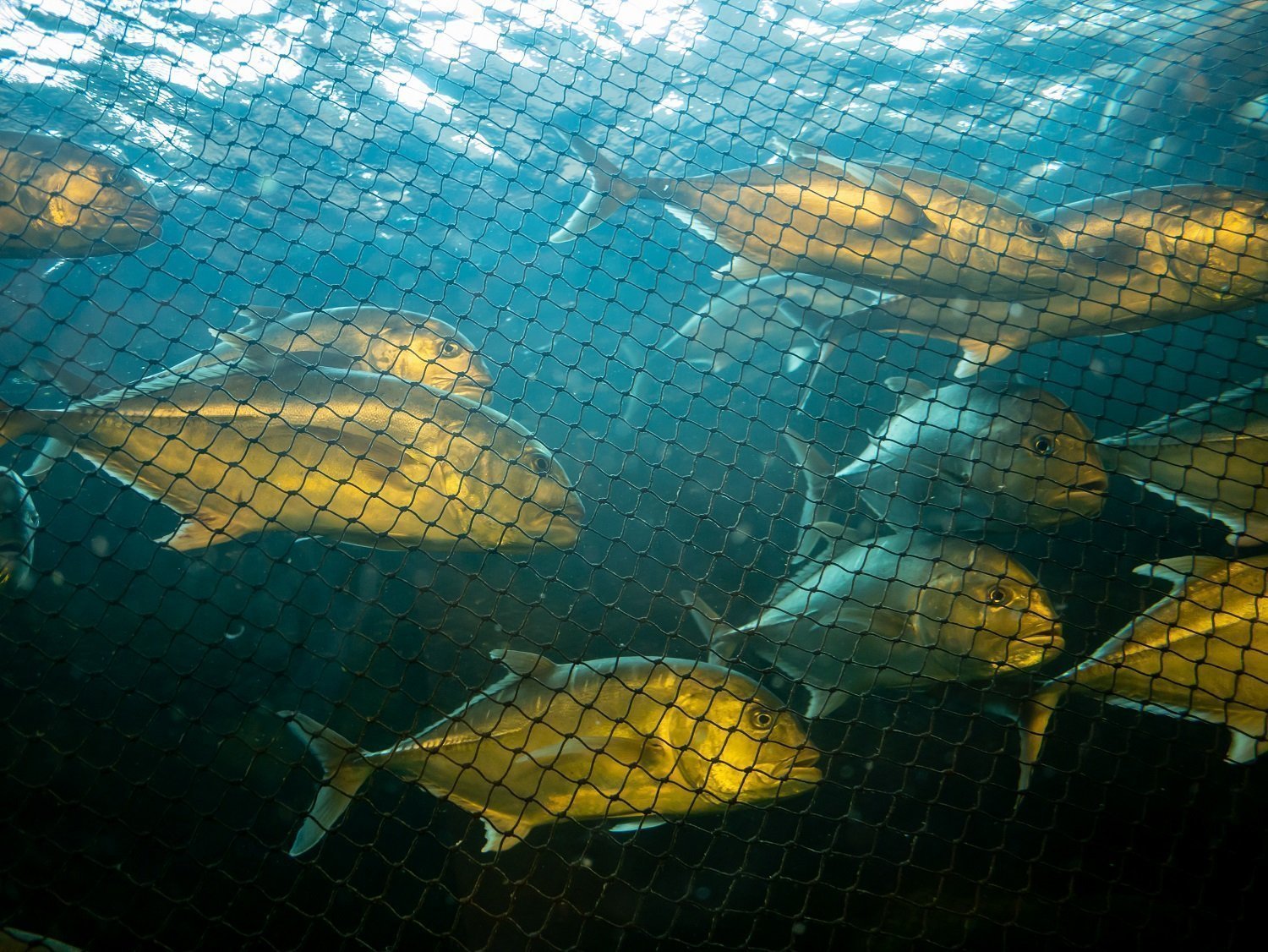 The economic balance is disturbed

The increase in scavengers in the natural environment causes the economic balance to deteriorate. The reproduction of the aforementioned creatures means a risk for fish and other creatures that can be evaluated economically. Most of these creatures are parasitic and contain toxins.

The main danger that deteriorates water quality is ghost nets, rather than dead creatures, due to their toxic content and their capacity to pass it into the aquatic environment.

Nets made of plastic material containing toxic chemicals both impair water quality and threaten living life by collecting persistent pollutants and pathogens in the water environment.

Nets drift in ocean currents, trapping hundreds of thousands of sea creatures each year, causing serious damage. In addition to the damage to marine habitats, it also causes navigational hazards that can damage boats.

Nets stay in water 600 years long and turn into Microplastics

It takes many years for ghost nets to decompose in the water. The reason for this is that it is not exposed to various sun rays underwater and the temperature is more stable. The nets on land rot in a shorter time due to exposure to various external influences and high temperature change. It is stated by various sources that fishing nets last for 600 years on the sea floor.

Instead of completely disappearing in the aquatic environment, ghost nets both trap sea creatures and turn into microplastics by eroding and breaking down with each passing day.

After this transformation, microplastics, which are consumed by many sea creatures as food, progress in the food chain. These chemicals, which accumulate in living things, pose a threat to both the life of sea creatures and human health through fisheries.

From 2000 to 2012, the National Marine Fisheries Service reported an average of 11 large whales entangled in ghost nets each year along the west coast of the United States. From 2002 to 2010, 870 nets were seized in Washington state, in which more than 32,000 marine animals were trapped.

An estimated 46% of the Great Pacific landfill is made up of fishing-related plastics. Fishing nets account for about 1% of the total mass of all marine macroplastics larger than 200 millimeters (7.9 inches), and plastic fishing gear more than two-thirds of the total mass.

According to the SeaDoc Community, each ghost net kills $20,000 worth of Dungeness crab over 10 years. In the Chesapeake Bay alone, ghost crab traps are thought to perish 1.25 million blue crabs each year, according to the Virginia Institute of Marine Science.

In May 2016, 10 tonnes of abandoned nets were collected within the boundaries of the Australian Fisheries Managing Authority (AFMA), the Australian Exclusive Economic Zone and the Torres Strait protected area.

Unlike synthetic fishing nets, biodegradable fishing nets naturally decompose underwater after a certain period of time. Fishing nets made from coconut fiber can be used commercially and are therefore a practical solution for fishermen.

Meanwhile, technological systems for marking and tracking fishing gear are also being trialled, including GPS tracking, to promote greater trackability and transparency.

Legalization of used equipment purchases and establishment of waste management systems are needed to manage and reduce fishing gear that is abandoned, lost and discarded at sea. For example, the company Net-works found a solution by turning abandoned, discarded fishing nets into carpet tiles.

Between 2008 and 2015, the U.S. Fishing for Energy initiative collected 2.8 million pounds of fishing gear and, in partnership with Covanta Energy, converted it into enough electricity to power 182 homes for a year.

A plan to protect the UK seas from ghost fishing was supported by the European Parliament Fisheries Committee in 2018.

Net amnesty schemes such as Fishing for Litter encourage the collection and responsible disposal of end-of-life fishing gear. These plans address the root cause of abandonment, which is the financial cost of divestiture.

Fishing nets are often made of extremely high quality plastics to provide the appropriate strength, making them acceptable for recycling.

Initiatives such as Healthy Seas are projecting environmental cleanup recommendations with manufacturers to reuse these materials. Recycled waste nets can be turned into consumer products such as yarn and swimwear.

Between 1980 and 1981, the French government offered local coast guards a reward for ghost nets on parts of the Normandy coast. However, the project was abandoned after people destroyed commercial networks instead of clearing ghost nets from the coastline or the ocean.