The last time major central banks shifted gears together, it was a cooperative move to keep the financial crisis of a decade ago from becoming a full-bore, worldwide depression.

Now, a new round of global ratecutting risks taking on a competitive edge as policymakers try to stay ahead of rising trade tensions, a volatile investment climate, and a shift in the political mood from shared support for globalization to a more zero-sum battle over a slower-growing world economy.

It’s a situation that has created deep internal divisions at the European Central Bank, the Bank of Japan and the U.S. Federal Reserve as officials debate how to confront a global slowdown with limited room to cut interest rates, and with elected officials pursuing policies that may be doing harm, at least in the short run.

The three institutions, particularly the Fed, set financial conditions that influence interest rates, exchange rates and capital flows worldwide, and all three are expected to loosen monetary policy when they meet over the next eight days.

If the situation seems to echo the coordinated easing of a decade ago, the focus on trade and the fate of global manufacturing have created a different landscape, where winners in one part of the world may come at the expense of losers elsewhere.

“The worst thing that could happen is a global race to the bottom,” among central bankers in Tokyo, Frankfurt and Washington, said one official familiar with the BOJ’s thinking, who spoke on condition of anonymity.

Not everyone feels the need for looser policy, and indeed Japan in particular is concerned about it.

If the Fed and ECB do as expected at their upcoming meetings, BOJ officials will be torn between how a stressed financial system may respond to ever lower rates, and how Japanese exporters may be damaged if the yen rises in value as a result of the actions of those other central banks.

European officials, disappointed that elected leaders haven’t spent aggressively to boost economic growth, are sparring over how much lower already negative rates can go without causing problems, how expansive other ECB programs should become, and what good any of it might do.

At the Fed, policymakers are split over whether to cut a lot, a little or not at all.

In each case, officials are reckoning with the fact that their economies and financial systems have become so tied together that fully independent policymaking, insofar as it ever was possible, may be a thing of the past.

“We really thought monetary policy had things under control,” and would be able to offset whatever programs elected leaders chose to pursue, even a trade war, said Tara Sinclair, an economics professor at George Washington University.

“Does that work in a super low interest rate world and in a very integrated world?” when central banks may have lost much of their traditional influence over the domestic economy.

CHASING EACH OTHER DOWN

The ECB meets this Thursday, and European officials noted their place in the queue as they contemplate pushing the euro area’s target interest rate deeper into negative territory.

The Fed’s decision in July to reduce interest rates for the first time in more than a decade “had indirect consequences for European monetary policy…through channels such as exports and the exchange rate,” said Bundesbank President Jens Weidmann. Now, “if the ECB further loosens the monetary policy reins, this could, in turn, step up pressure on the Fed to act.”

The Fed’s latest policy meeting concludes next week, on Wednesday, Sept. 18, when the U.S. central bank is expected to reduce interest rates again by a quarter of a percentage point. The BOJ meets the next day.

Recession risks may be rising, with policymakers like St. Louis Fed President James Bullard saying larger central bank moves may be warranted to bring the Fed, for example, closer into line with what financial markets expect and to lift the inflation outlook.

Yet unlike a decade ago interest rates are already so low, and even negative in Europe and Japan, that the impact of rate cuts alone is not expected to be great. The appetite for less conventional steps, like more aggressive bondbuying, is untested outside of crisis conditions in the United States, and remains controversial elsewhere.

(Graphic: Central banks in an age of competition – here) 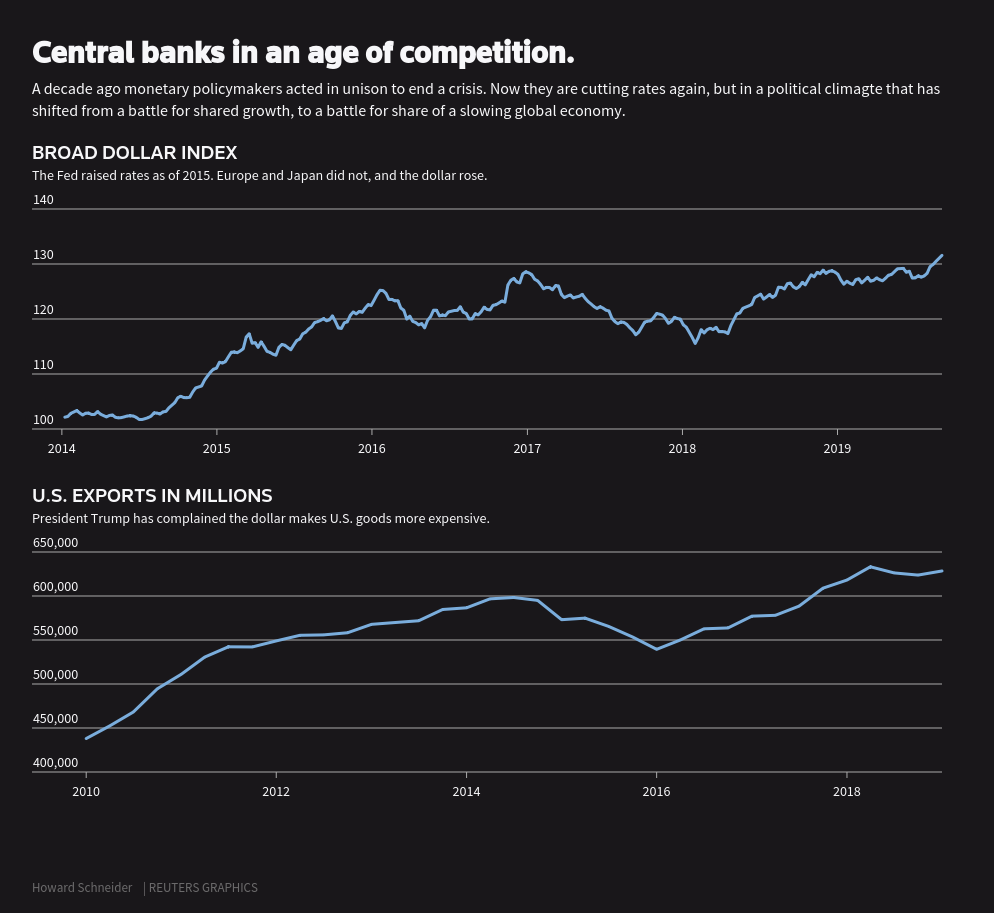 In addition, the policy moves of a decade ago were about rekindling growth that would help every nation, and elected officials and fiscal leaders were enacting their own economic stimulus programs to pull in the same direction as monetary policy.

Now, they are pulling the other way, particularly in the United States where efforts to protect local industries using tariff and trade restrictions, according to many economists, have weighed on global growth.

The focus on tradeable goods has made the politically sensitive issue of exchange rates more important.

Monetary policy shifts world capital flows, and in doing so alters the relative price of a country’s exports and imports. In his criticism of the Fed, for example, Trump has encouraged rate cuts to try to keep the value of the dollar down – a troubling argument for Europe, in particular, with Germany perhaps already in recession and hoping to maintain the trade surplus that drives its economy.

Goldman Sachs analysts this week said the likely outcome, even with the expected Fed and other action, is a sort of sluggishness that may not involve a recession as much as subpar performance – a reminder that, even as some try to reverse decades of globalization, its influence remains.

“You can’t ignore what’s going on in the rest of the world,” said MIT economics professor and former Bank of England official Kristin Forbes. “We don’t live in a bubble.”

Reporting by Howard Schneider in Washington; Additional reporting by Leikha Kihara in Tokyo and Balazs Koranyi in Frankfurt; Editing by Dan Burns and Andrea Ricci

For US ports, ‘gloves are back off and we are able to ship to China again’

Bunkerist - 27 January 2020 - 17:46
© 2013 Bunkerist - Trading & Brokering. Who we are? Please be in contact with us if the contents of our website violate the copyright of your company and/or person.