Home Latest News Global economy on the mend; growth to pick up in 2020, say...

After nearly two years of flagging growth, global GDP rate is set to stabilise in calendar year 2020 (CY20) and start looking up from the second half of the year into 2021, leading brokerages have said. However, for this to happen, they expect trade tensions to ease, jobs growth and consumption in the US to remain robust and central bank stimulus to gain some traction.
Analysts at Goldman Sachs, for instance, see a pick-up in global growth rates going ahead in response to easier financial conditions and an end to the trade escalation between the US and China. Based on their working model, they see a 20 per cent chance of the US economy entering a recessionary phase in 2020.
“Although annual-average GDP growth is likely to rise only modestly from 3.1 per cent in 2019 to 3.4 per cent in 2020, this conceals a more pronounced sequential pattern of slowing growth this year and—in our forecast—gradually rising growth next year. Our confidence that growth will improve sequentially is highest in the US, where demand is most responsive to financial conditions, and the UK, where we expect the Brexit drag to reverse and fiscal policy to ease,” wrote Jan Hatzius, chief economist at Goldman Sachs in a recent co-authored report with Daan Struyven and Ronnie Walker.
Morgan Stanley, on the other hand, sees global GDP growth in CY20 at 3.2 per cent and 3.5 per cent in CY21. Those at CLSA peg 2019 global growth at 2.2 per cent, down from 2.9 per cent in the previous year and expect it to reach 1 per cent in 2020 before bouncing back to 2.2 per cent in 2021.
Bloomberg Economics’ global GDP tracker shows the pace of expansion has slowed to 2.4 per cent in the third quarter of 2019, down from 4.7 per cent at the start of 2018.
“Since the start of 2018, we have seen the longest period of a downgrade to GDP growth. But there does seem to be light at the end of the tunnel. Purchasing Manager Indexes (PMIs) have bounced a little from their recent lows having been at the top end of their range in January 2018,” wrote Andrew Garthwaite, managing director and global equity strategist at Credit Suisse in a recent co-authored report.
Slow recovery in India
Despite the optimism surrounding the likely pick-up in the global economy, most economists remain cautious on the road ahead for India after the recent GDP print of 4.5 per cent for the second quarter (Q2) of the current fiscal (FY20).
Analysts at Nomura, for instance, expect the GDP to remain sub-par until mid-2020 with an improvement (above 6 per cent) only in the third quarter of 2020 (Q3-2020). “We believe the current risks prolonging the balance sheet deleveraging cycle, postponing the private investment cycle recovery, and thereby further hurting India’s potential growth,” wrote Sonal Varma, managing director and chief India economist at Nomura in a co-authored report with Aurodeep Nandi. 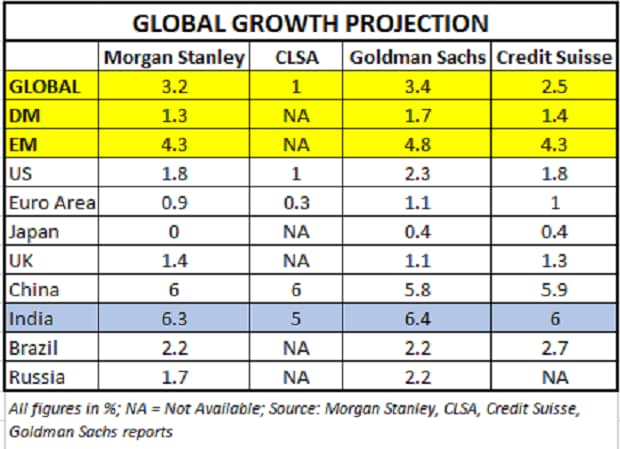 Oil and gas sector to boost investment in the energy transition, despite weakening confidence for 2020 – New research

Bunkerist - 21 January 2020 - 12:19
© 2013 Bunkerist - Trading & Brokering. Who we are? Please be in contact with us if the contents of our website violate the copyright of your company and/or person.